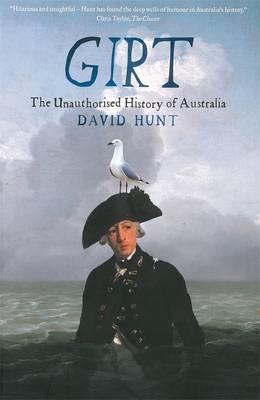 David Hunt’s history of Australia Girt is the funniest book I have read in a long while. In a similar vein to the writings of Bill Bryson Hunt takes the historical truth and writes it in a way that makes you laugh out loud. This is the first book in a very long while that I could not help but read passages out loud to my husband who has decided that he too will now read the book. His style, wit and language make this book a joy to read.

The book starts with the discovery of Australian and why most of those who are credited with first discovering it did not at all and at the fascination of the Dutch for nailing kitchen plates to posts. He finishes with Governor Macquarie in the early 1800s. Thankfully a seccond book has been written that will take us further along in history.

Hunt describes the book as revealing  Australia’s past – “from Megafauna to Macquarie — the cock-ups and the curiosities, the forgotten eccentrics and Eureka moments that have made us who we are.” I totally agree with this description.

Throughout the book he offers footnotes which are explanatory asides. For example in a section talking of our founding felons he mentioned that having asked for breeding women he was given a 70 year old cheese thief called Elizabeth Beckford. At this point a footnote was attached and it read ” Many first fleet convicts stole food to ward off starvation. William Edmunds was transported for stealing a cow, while Thomas Eccles was exiled for filching bacon and two loaves of bread. If Elizabeth Beckford had joined forces with these criminal masterminds, the cheese and bacon burger would have been invented 140 years earlier.” (p103)

Being an Australian I knew the history that was contained within the pages and I don’t know whether it would lose the deeper meanings for those reading who did not have both that knowledge and a knowledge of current Australia, but I think the humour, typically Australian, would be universal. Although at times Hunt is not politically correct he is at no time being nasty and he leaves no-one untouched with his tongue in cheek humour.

I would highly recommend this book and can’t wait to read the sequel True Girt.

I began my working career as a reluctant potato peeler whilst waiting to commence my training as a student nurse. On completion I worked mainly in intensive care/coronary care; finishing my hospital career as clinical nurse educator in intensive care. A life changing period as a resort owner/manager on the island of Tanna in Vanuatu was followed by recovery time as a farmer at Bucca Wauka. Having discovered I was no farmer and vowing never again to own an animal bigger than myself I took on the Barrington General Store. Here we also ran a five star restaurant. Working the shop of a day 7am - 6pm followed by the restaurant until late was surprisingly more stressful than Tanna. On the sale we decided to retire and renovate our house with the help of a builder friend. Now believing we knew everything about building we set to constructing our own house. Just finished a coal mine decided to set up in our backyard. Definitely time to retire we moved to Queensland. I had been writing a manuscript for some time. In the desire to complete this I enrolled in a post grad certificate in creative Industries which I completed 2013. I followed this by doing a Master of Arts by research graduating in 2017. Now I live to write and write to live.
View all posts by Irene Waters 19 Writer Memoirist →
This entry was posted in Book reviews and tagged Australian author, Australian History, book review, David Hunt, Girt, irene waters. Bookmark the permalink.

20 Responses to Girt: The unauthorised History of Australia __ Book Review