Smile (While you still have teeth): A tale of fiction (part 3) 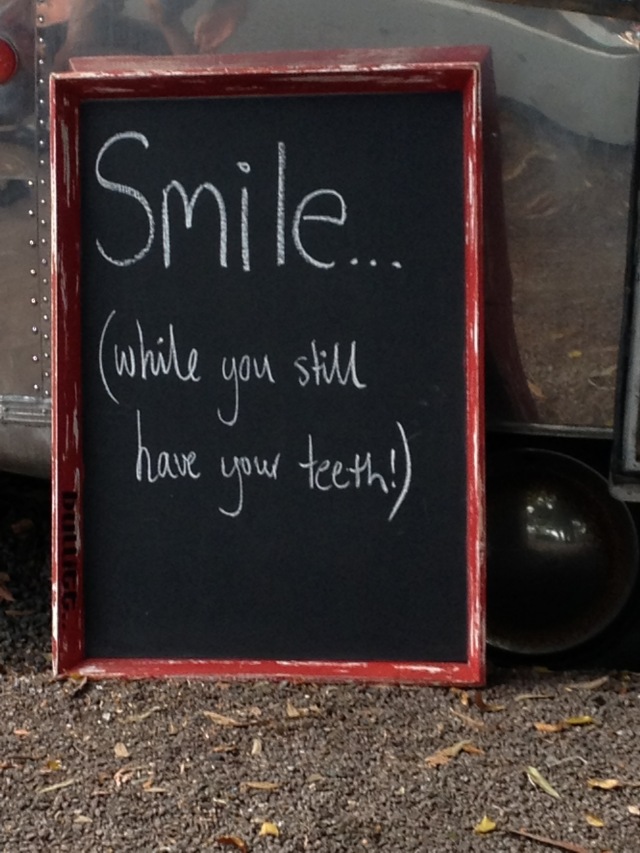 For the story thus far Part 1 and Part 2 Beverley’s smile had frozen when I entered to join the party.

“You’ve glued your bloody teeth out at right angles to the rest.”

“You’ve got to do something. Make an appointment with the dentist. We can’t go on like this.”

In an effort to save our relationship I returned to the dentist who sent me on to a dental prosthetics technician who measured me up for a new plate. Waiting a week for them to be made, it was hard to contain my excitement at the thought of no more problems.

They’re so heavy.” I complained to the prosthetics man when I collected them.

“They have to be like that to give them strength. That was only a temporary plate you had. This one will last you for years. You won’t get it breaking.”

He was right there. Made of metal I felt like Lurch when I put the plate in. It was so uncomfortable due to its weight that I continued to take it out at every opportunity. I would drive with them in my pocket and leave them lying around at home and in the garden. At least though, I could smile in public and apart from the constant “Have you seen my teeth?” my choppers receded into the background. I had other things to worry about.

Our business on the island and with our partner was going horribly wrong. We stood to lose our investment and needed our equity rights recognized by the courts. At the beginning of the trouble we had taken an injunction out which gave us sole management rights but it had also made us very unpopular on the island. Our partner was a chief and to the island people his word was not questioned. The hostility towards us by the local people was barely disguised.

Our physical presence was only required when there were tasks which could not be delegated to the man we left in charge. In these instances, as we were accountable, we flew to the island, always attempting to make our stay as short as possible. This particular trip we flew in on the morning plane and had booked to fly out on the plane the following morning.

After a productive day and evening and, with an early start essential the next day, we fell into bed exhausted. Waking early we gathered our bags together to wait for the transport to arrive to take us to the airport.

“Have you seen my choppers?”

“I can’t seem to find them.” My searching became frenetic as possibilities of a resting place for my two errant teeth became fewer.

“I’m sick of your bloody teeth. Why can’t you just leave them in your mouth?”

“We’re going to have to cancel our flight. Can you ring and reschedule for this afternoon?”

“Yes. I can’t seem to find them anywhere up here.” I could hear Beverley on the phone as I continued my search; pulling back the bedding, scattering the cushions on the lounge, extracting books from the bookcase, looking in the kitchen cupboards, in saucepans and in places we hadn’t gone. The elusive two teeth were nowhere to be found but we continued searching until the transport came to take us to the airport. The only explanation we concluded — a rat must have come in during the night and taken them.

Despite keeping my mouth tightly closed, Beverley obviously didn’t do the same, as my predicament reached the gossip pages of the weekly newssheet.

My lack of two front teeth again became a problem when old age and bad genes caused problems with the teeth that were holding the plate in. Eventually they had to be removed, leaving an even bigger gap in my mouth. A toss-up between a dental holiday to Thailand or having a plate with even more teeth attached became my dilemma. Once again economics ruled the day and I chose the plate as the cheaper option.

It’s actually quite comfortable. I don’t have the overwhelming urge to remove it from my mouth, which makes Beverley happier and more responsive to my passing kisses in the kitchen. Having been asked several times, “what have you done to your teeth? They look fantastic.” I inwardly cringe.

I began my working career as a reluctant potato peeler whilst waiting to commence my training as a student nurse. On completion I worked mainly in intensive care/coronary care; finishing my hospital career as clinical nurse educator in intensive care. A life changing period as a resort owner/manager on the island of Tanna in Vanuatu was followed by recovery time as a farmer at Bucca Wauka. Having discovered I was no farmer and vowing never again to own an animal bigger than myself I took on the Barrington General Store. Here we also ran a five star restaurant. Working the shop of a day 7am - 6pm followed by the restaurant until late was surprisingly more stressful than Tanna. On the sale we decided to retire and renovate our house with the help of a builder friend. Now believing we knew everything about building we set to constructing our own house. Just finished a coal mine decided to set up in our backyard. Definitely time to retire we moved to Queensland. I had been writing a manuscript for some time. In the desire to complete this I enrolled in a post grad certificate in creative Industries which I completed 2013. I followed this by doing a Master of Arts by research graduating in 2017. Now I live to write and write to live.
View all posts by Irene Waters 19 Writer Memoirist →
This entry was posted in creative writing, fiction, story telling and tagged Creative writing, fiction, irene waters, smile, storytelling, teeth. Bookmark the permalink.

8 Responses to Smile (While you still have teeth): A tale of fiction (part 3)