Raewyn of decocraftsdigicrafts  invited me to take part in the Five Photos, Five Stories Challenge.  Thanks, Raewyn! The challenge is  to “post a photo each day for five consecutive days and attach a story to the photo. It can be fiction or non-fiction, a poem or a short paragraph and each day nominate another blogger for the challenge”. 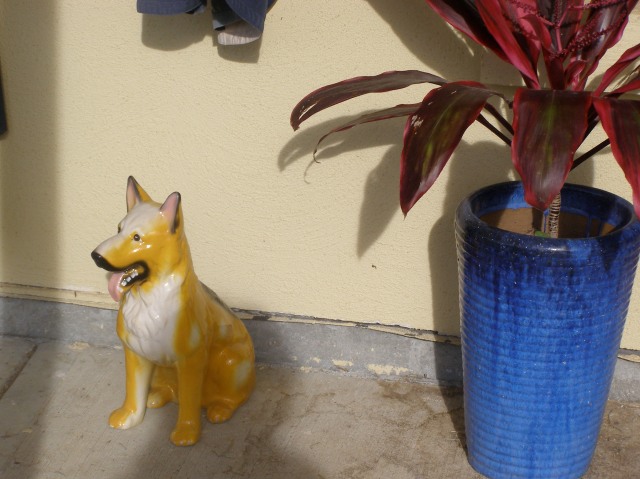 German Shepherd is my favourite breed of dog. I have now in my life had the pleasure of the company of seven german shepherds and currently  have one called Zack, who came to me as a Rescue Dog at the age of 6. He is now 13. From the time he arrived I was busy burying him. He had so many ailments that I could not see him surviving for very long. We did not have Zack, however, when we came by this china version of the breed.

We were travelling in Vietnam. Between Ho Chi Minh City and the Cai Rang floating markets on the Mekong Delta we passed many walled houses where the gate was guarded not by the traditional guardian lions (Foo Dogs) and Ming dogs but rather the ceramic german shepherd dog.

German Shepherds had been introduced to Vietnam during the war. More than 4,000 dogs served in the war and it is believed that they saved more than 10,000 U.S, veterans lives by extending their handlers sense of sight, smell and hearing. They were so effective that the Viet Cong offered a $20,000 bounty for their capture. At the completion of their service the soldiers were not allowed to repatriate their dogs, not even at the soldier’s own expense. Instead they were told to leave them in a strange land. Many soldiers shot their dogs rather than leave their faithful companion to an unknown fate. I can feel the heartache that must have been hard felt. Some of these soldiers were then court martialed for their destruction  oh army property.

Seeing these china statues standing guard on many gates I hoped that these dogs were revered and cherished by those that took them in. We determined that we had to take one home with us. There would come a day when we no longer had our own, live companion.

We had no opportunity to find one despite looking until we arrived in Phnom Penh. The numbers we were seeing on the gates had dropped significantly and we feared that we may not find any. We walked the streets. I felt uncomfortable. We were not in a tourist area, unless you were looking to procure a girl. Many workshops were in the area we walked and eventually to my delight we found our model in a plumbing shop.

After we made our purchase Roger and I became separated after an argument about crossing one of those roads that had so much traffic on it and I high tailed it back to the motel. Then panic set in. Roger has no sense of direction and probably wouldn’t know the name of our accommodation. I spent a couple of hours worrying. He finally turned up on the back of a motorcycle, clutching our dog.

The dog was then cossetted. Protected as we boarded buses and planes. We didn’t want him to break before we got home and we took good care of him. On our flight home we had a five-hour wait in Singapore. We put our luggage on a trolley and wandered aimlessly. Then Roger decided we would go up the escalator which we did me protesting that it wasn’t allowed. We wandered up there for awhile and then went back down the escalator. As the stairs fell away so did my backpack with the dog snuggled inside it. It summersaulted down the escalator landing with a thud at the bottom. (There is a reason they say not to take trolleys on these stairways). My heart sank but miraculously the dog survived the tumble and now sits guarding the entrance to our house.

So now I’m supposed to invite someone else to join in the fun. That’s easy, I nominate Sherri Matthews  from the View from My Summerhouse. No obligation, Sherri!

I began my working career as a reluctant potato peeler whilst waiting to commence my training as a student nurse. On completion I worked mainly in intensive care/coronary care; finishing my hospital career as clinical nurse educator in intensive care. A life changing period as a resort owner/manager on the island of Tanna in Vanuatu was followed by recovery time as a farmer at Bucca Wauka. Having discovered I was no farmer and vowing never again to own an animal bigger than myself I took on the Barrington General Store. Here we also ran a five star restaurant. Working the shop of a day 7am - 6pm followed by the restaurant until late was surprisingly more stressful than Tanna. On the sale we decided to retire and renovate our house with the help of a builder friend. Now believing we knew everything about building we set to constructing our own house. Just finished a coal mine decided to set up in our backyard. Definitely time to retire we moved to Queensland. I had been writing a manuscript for some time. In the desire to complete this I enrolled in a post grad certificate in creative Industries which I completed 2013. I followed this by doing a Master of Arts by research graduating in 2017. Now I live to write and write to live.
View all posts by Irene Waters 19 Writer Memoirist →
This entry was posted in Awards, creative writing, Dogs, Memoir, story telling, travel, Writing and tagged Creative writing, German Shepherd Dog, irene waters, Pet, Photography, Vietnam, Vietnam War. Bookmark the permalink.