My approach to travel is normally  lazy.  I generally don’t research anything before leaving, I pack the day before or the day of departure and I don’t take a lot with me. This trip was an exception to the rule. We had been visiting Egypt in 2011 but the uprising against Hosni Mobarak put an end to that trip. Prior to that in Luxor we knew that 18 tourists had been killed at the Luxor temple. That hadn’t stopped us preparing to go in 2011 as that kind of thing could sadly happen anywhere in the world. You wouldn’t travel to the United States,  Paris, London and even these days Australia’s own Melbourne if you were worried about that kind of thing. In 2011, however, the Australian Government put out travel warnings and our tour operator cancelled the tour. Perhaps a good thing as it was costing us three times what we paid for this trip which we bought as a scoopon (online cheap deals).

So whilst Roger read about the pharohs and Gods and Goddesses, heiroglyphics and cartouches  I  researched some dos and don’ts for the visitor to Egypt.

Both men and women should wear long sleeves and long pants. A man can get away with it but it is not a good idea for a woman. Anything I can get in Australia with long sleeves is hot and I knew that I would struggle if I was trussed up in 50 degree heat. Luckily we chose the right time of year to go. Temperatures were less than they were at home with an average around 25 degrees. No rain. If any comes it arrives in winter (Dec, Jan, Feb). In fact it was perfect weather for the gruelling tour task we had undertaken. The best months for weather and for less tourists is March to May or September to November. I would have struggled if we had gone in the heat of summer. I accessed bamboo clothing and light cotton long sleeved shirt dresses. Roger said that I looked as though I belonged  in Egypt in the clobber I chose and to tell the truth I would have felt uncomfortable in less.

photo courtesy of our guide Bassem

Our research showed that we could obtain our Egyptian visas at Cairo airport as long as we had $25 US. It also said that we should passport photos to give them and birth certificate. We obtained these items but found they were unnecessary. All we needed was the money and our passport and it was done in a flash.

How much money to take was our biggest quanderry. We rang the operator that Scoopon directed us to and she said ” you have paid for everything so you shouldn’t need anything more than a bit of spending money.” NOT TRUE. We took her at her word and as we are not big buyers of market items when we travel we organised US$200 with around a quarter in $1 notes. I had read that these were essential  for toilet tipping, and the odd other unexpected thing. Apart from that we could withdraw Egyptian dollars in cash from ATMs using our keycard and for any purchase made there would always be our credit card. In reality we needed around $1000 Au cash for tips. As an Australian I am not used to tipping and this came as a big shock. Our tour was very cheap but did not include tips. The more expensive tours did include the tips. It is something you need to check when you sign up for a tour. Our trip was still cheaper when the tips were added on but it became an issue for all the Australians in our group by the end of the tour when it was realised just how much extra money they had to find – and everyone is on a budget. You don’t chose to go cheap if you aren’t. That aside, if we had been prewarned it would not have been an issue. We also found that there were additional tours that could be bought and you are only there once so you tend to take up most of them. Each person needs to allow around $500 US for these.

The final preparation I had to go was prepare my camera. I knew there would be much I wanted to photograph and I worried about battery and memory. I purchased a battery charger and an additional battery. We already had power converter for our Australian electrical plugs (Egypt uses the EU round plugs)). I purchased four memory cards – 2 x 32 gb and 2 x16 GB.  This was worth it = particularly the battery. Every day I found I had to change my battery. I used the 64 gb but as my camera will download to my ipad I could have wiped the memory card and survived with just the one 32gb. I like a margin of safety and will keep the photos on the cards as well as on the computer.

With not enough money, our small bags packed with long sleeved items, tickets, camera and passport we were ready to leave knowing that we needed to take with us a relaxed attitude and a sense of humour to Egypt. We would also be sensitive and respectful to Egypt’s customs, traditions, culture and different religions. As an Islamic country men and women who are not from the same family are not permitted to touch each other and any public displays of affection are offensive. This was going to be difficult for me as we often hold hands but we were prepared to try. I also had to try and remember to be one handed as in Egypt the left is used only for sanitary purposes. It would be an insult to hand money over with my left hand or take a handful of crisps with it. I knew I would do my best with these things but would I remember not to drink from the tap? 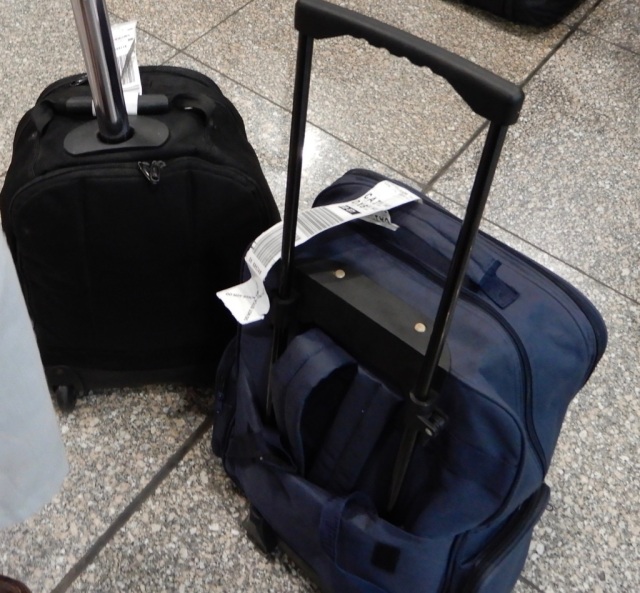 © irene waters 2018 We travel light. This was our checked in luggage. Roger had no carry on and I had a small day pack.

I began my working career as a reluctant potato peeler whilst waiting to commence my training as a student nurse. On completion I worked mainly in intensive care/coronary care; finishing my hospital career as clinical nurse educator in intensive care. A life changing period as a resort owner/manager on the island of Tanna in Vanuatu was followed by recovery time as a farmer at Bucca Wauka. Having discovered I was no farmer and vowing never again to own an animal bigger than myself I took on the Barrington General Store. Here we also ran a five star restaurant. Working the shop of a day 7am - 6pm followed by the restaurant until late was surprisingly more stressful than Tanna. On the sale we decided to retire and renovate our house with the help of a builder friend. Now believing we knew everything about building we set to constructing our own house. Just finished a coal mine decided to set up in our backyard. Definitely time to retire we moved to Queensland. I had been writing a manuscript for some time. In the desire to complete this I enrolled in a post grad certificate in creative Industries which I completed 2013. I followed this by doing a Master of Arts by research graduating in 2017. Now I live to write and write to live.
View all posts by Irene Waters 19 Writer Memoirist →
This entry was posted in photography, travel and tagged Egypt, irene waters, money, preparation, travel. Bookmark the permalink.

23 Responses to Preparing to travel to Egypt: Travel Thoughts 1