The Underground Railroad: A Book Review 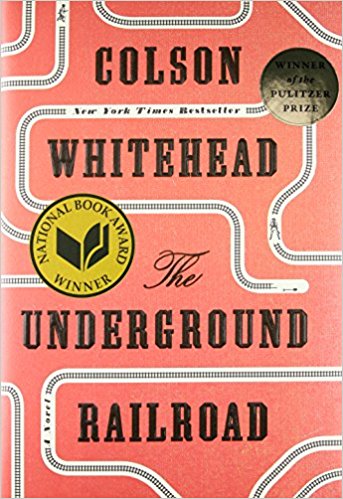 Just imagine what it must have been like to live the life of Cora, a slave girl on a cotton plantation in Georgia if I found reading it torrid and stressful. I have no doubt that the scenes described in this book happened, if not to the fictional Cora, to the real life slaves of the Southern States before the Civil War. It is hard to comprehend such cruelty given that this was such a short time ago.  Slavery was the only reality in this pulitzer prize winning book written by Colson Whitehead who created a novel way for an escaping slave to travel. Instead of a metaphorical underground railway the railway becomes real complete with station masters and engine men. This mode of travel allows the escaping slave Cora to travel to a multitude of southern states, each dealing with slavery in different ways from sympathetic to horrific. In some locations she initially believes she has found paradise only to have that illusion  tumble down around her leaving me feeling in a small way as she must have done.

Cora is a third generation slave and has never been off the plantation she was born on. Her grandmother died in the fields and her mother left her when she was ten and escaped. She was the only slave from this plantation to succeed at this and this gave Cora some purchase in the slave quarters along with her fierce determination to maintain control over her small plot that had been her mothers. When a new slave tried to take it from her to build dog kennels she attacked him. The same anger overcame her when a white man caned a black boy, she threw herself  over the boy getting the caning herself. Both child and Cora were severely punished the next day. These events led Caesar (another slave) to ask Cora to escape with him. Initially she said no but when the white man inherited the plantation she changed her mind.

on her maple and smelled the air and listened. Things in the

swamp whistled and splashed, hunting in the living darkness.

To walk in there at night, heading north to the Free States.

Have to take leave of your senses to do that.

But her mother had.

Would I recommend this book: Yes, I would. Although I couldn’t say I enjoyed this book I couldn’t put it down either. I wondered at the relevance of it today and I think there are many members of our society that feel about African Americans as was expressed by the white people in this book. Just this morning I heard that African American babies are often born premature and are more likely to die at or near birth compared to white babies. The research being reported, although in its early stages, is suggestive that the cause of this is racism. I feel that this is a powerful book and one that should be read by everybody in the journey to overcome racism.

I began my working career as a reluctant potato peeler whilst waiting to commence my training as a student nurse. On completion I worked mainly in intensive care/coronary care; finishing my hospital career as clinical nurse educator in intensive care. A life changing period as a resort owner/manager on the island of Tanna in Vanuatu was followed by recovery time as a farmer at Bucca Wauka. Having discovered I was no farmer and vowing never again to own an animal bigger than myself I took on the Barrington General Store. Here we also ran a five star restaurant. Working the shop of a day 7am - 6pm followed by the restaurant until late was surprisingly more stressful than Tanna. On the sale we decided to retire and renovate our house with the help of a builder friend. Now believing we knew everything about building we set to constructing our own house. Just finished a coal mine decided to set up in our backyard. Definitely time to retire we moved to Queensland. I had been writing a manuscript for some time. In the desire to complete this I enrolled in a post grad certificate in creative Industries which I completed 2013. I followed this by doing a Master of Arts by research graduating in 2017. Now I live to write and write to live.
View all posts by Irene Waters 19 Writer Memoirist →
This entry was posted in Book reviews and tagged book review, Colson Whitehead, irene waters, magical realism, slavery, The Underground Railway. Bookmark the permalink.

3 Responses to The Underground Railroad: A Book Review