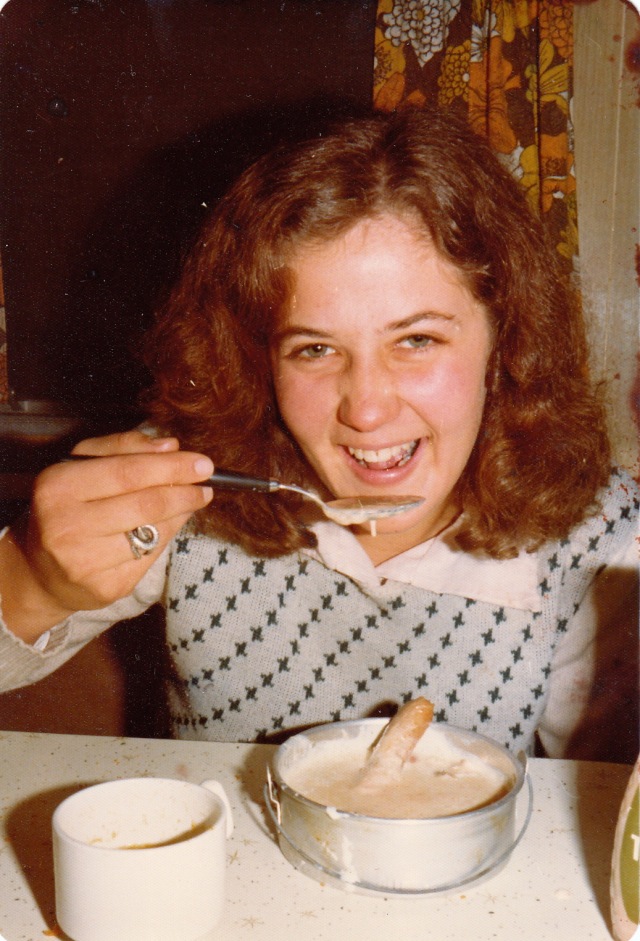 The prompt for this month is Childhood Cooking Experiences.Reading Robbies flash fiction I started to think about how cooking was presented to me as a child. Did your mother set you up to cook by working side by side with you in the kitchen? Did she set you up to be kitchen illiterate?”

My mother was a high school teacher and worked most of my life. She went back to work when I was three years old. During the week we had very plain food – meat and three veg. She would come home tired after her day and spend the next hour reading the newspaper. Shortly after she’d finish she’d think about dinner – always planned in advance. I know my mother would not have considered cooking a chore but it certainly came across to us that it was something she had to do. A wife had to feed the family.  A wife, in those days, was expected to stay at home. Mum was determined to have a career but also maintain the home fires in a way that no-one could say that we suffered from her daytime absence. During the week the only time we entered the kitchen when she was preparing meals was to either wash up or get the necessaries to set the table. Weekends weren’t much different although with the additional time Mum would make an effort to have special meals on Saturday night and Sunday at lunchtime. If we had dessert during the week my Dad made a jelly. He was the expert in this field.  Mum would often make a pie or some other sweet for the weekend meals. Cooking cakes and biscuits was confined to when she had to take  something for morning tea or if the church ladies guild were having a cake sale. And of course she made super cakes for our birthdays. 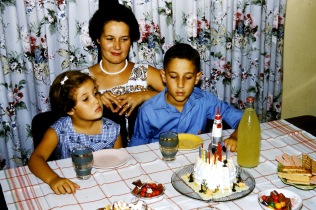 In my memory we weren’t invited into the kitchen to help with the cooking. The most we did was get to lick the bowl out. As a girl I was not expected to assist with food preparation until we had moved to the city and I was much older. Then it was only to peel the vegetables.

It was not until my Father took me to the Royal Easter show and we visited the A-jin-o-moto (a brand name for MSG) stand and were given a recipe book and also collected some Arnotts recipe cards that I had a desire to cook. When I was doing my HSC this became the way I avoided study. I would come home from school, get out these cards and spend the rest of the afternoon cooking. It didn’t last long. Most of the recipes were a failure due to my lack of prowess such as misinterpreting the order of 1 tsp almond essence and putting in one tablespoon.

I wonder sometimes when I watch mother’s with their children in the kitchen making simple gingerbread men or peeling the veggies or whipping cream or any task a small child is capable of and then see those children grow to be competent in the kitchen as adults, whether I too would have been able to cook had I had these experiences. My gut tells me probably not – my mother sewed and encouraged me in this pursuit – but I still can’t do it.

I’m looking forward to reading  your memories……. and don’t forget that if you are interested in memoir check out the series on the second Friday of the month over at Carrot Ranch. Join in the conversation.

Times Past: Cooking with Mum

I began my working career as a reluctant potato peeler whilst waiting to commence my training as a student nurse. On completion I worked mainly in intensive care/coronary care; finishing my hospital career as clinical nurse educator in intensive care. A life changing period as a resort owner/manager on the island of Tanna in Vanuatu was followed by recovery time as a farmer at Bucca Wauka. Having discovered I was no farmer and vowing never again to own an animal bigger than myself I took on the Barrington General Store. Here we also ran a five star restaurant. Working the shop of a day 7am - 6pm followed by the restaurant until late was surprisingly more stressful than Tanna. On the sale we decided to retire and renovate our house with the help of a builder friend. Now believing we knew everything about building we set to constructing our own house. Just finished a coal mine decided to set up in our backyard. Definitely time to retire we moved to Queensland. I had been writing a manuscript for some time. In the desire to complete this I enrolled in a post grad certificate in creative Industries which I completed 2013. I followed this by doing a Master of Arts by research graduating in 2017. Now I live to write and write to live.
View all posts by Irene Waters 19 Writer Memoirist →
This entry was posted in Memoir, Past Challenge, Times Past and tagged childhood memories, Cooking, irene waters, memoir, times past challenge. Bookmark the permalink.

40 Responses to Cooking With Mum – Childhood Experiences: Times Past