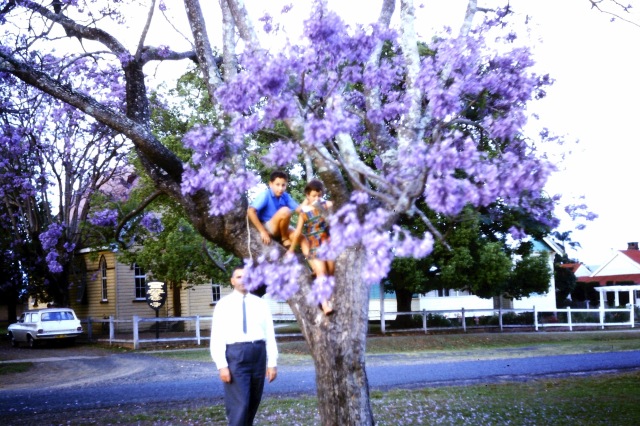 It may seem like a strange topic choice for a memoir examination where we are specifically looking for differences between generations and geographical locations but I wonder how much trees, or lack of them, affect how we currently view trees. Did a tree ever feature in a story of your life? When is the first time that you consciously thought about a tree or trees? Looking at early family photography did a tree ever feature in a photograph? Did you have a special tree?

Although we grew up in a small town in the country and were surrounded by trees they played only a small part in my consciousness at the time. We had a Jacaranda tree out the front on the street which my brother used to climb and I was put into for this photo but it was a tree just out of frame that was my nemesis. My brother built himself a platform on which he and his friends could sit without being disturbed by me who was usually at the base begging for them to pull me up. They usually ignored me and I was thrilled on the one occasion that they decided to allow me access to their private quarters. They pulled me up and I have to admit the climb wasn’t that onerous. Almost as soon as I was up they decided that they would go ride their bikes or some other such pursuit and descended leaving me alone with my fears. No matter how much I tried to overcome my terror of descending perhaps quicker than was called for, I could not make myself start the climb down. It seemed like hours before my Dad heard my calls for help and came out to assist me down. It is the first and last tree I attempted to climb.

When we moved to the city several years later I was full of anger towards my parents. I didn’t want to move, I didn’t want to leave my friends and I didn’t want to leave the country surroundings I’d grown up with. “Don’t worry” my mother assured me. “We are moving to Strathfield and it’s a suburb that is known for its trees.” I obviously hung onto this idea and became even angrier when the tree’d suburb was one where there was a sick, stunted tree planted in the nature strip at regular intervals. These trees were nothing like the random, untidy gums and tallow woods of my country town – trees that when I lived there I had barely noticed. You don’t realise how much something means to you until it has gone and now – trees are an important part of my psyche.

I’m looking forward to reading  your memories……. and don’t forget that if you are interested in memoir check out the series on the second Friday of the month over at Carrot Ranch. Join in the conversation.

Times Past: Back in Time with Trees

I began my working career as a reluctant potato peeler whilst waiting to commence my training as a student nurse. On completion I worked mainly in intensive care/coronary care; finishing my hospital career as clinical nurse educator in intensive care. A life changing period as a resort owner/manager on the island of Tanna in Vanuatu was followed by recovery time as a farmer at Bucca Wauka. Having discovered I was no farmer and vowing never again to own an animal bigger than myself I took on the Barrington General Store. Here we also ran a five star restaurant. Working the shop of a day 7am - 6pm followed by the restaurant until late was surprisingly more stressful than Tanna. On the sale we decided to retire and renovate our house with the help of a builder friend. Now believing we knew everything about building we set to constructing our own house. Just finished a coal mine decided to set up in our backyard. Definitely time to retire we moved to Queensland. I had been writing a manuscript for some time. In the desire to complete this I enrolled in a post grad certificate in creative Industries which I completed 2013. I followed this by doing a Master of Arts by research graduating in 2017. Now I live to write and write to live.
View all posts by Irene Waters 19 Writer Memoirist →
This entry was posted in Australia, creative writing, Memoir, memoir writing, Past Challenge, photography, Times Past and tagged irene waters, memoir, memories, times past challenge, trees. Bookmark the permalink.

54 Responses to Trees: Times Past