The Fireborn: A book Review 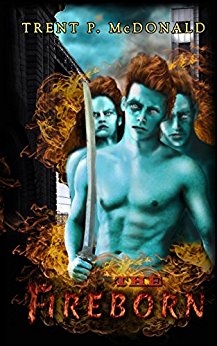 A cruise allowed me to catch up on a few of the many books on my reading list and I have to say I’m happy I had the opportunity to read fellow blogger, Trent McDonald’s The Fireborn. Although the genre is not my normal choice of reading I have to admit I thoroughly enjoyed this fantastical tale that took the mediaeval legend of Arthur and the celtic warriors, found their modern day counterparts and continued the battle through America and the UK .

Elliot, the main character,  is a revisionist historian. I love that concept of re-examining history from a different angle and putting new perspectives on it.  His brother is an archaeologist who has found a cauldron that takes us back to the time of King Arthur. As a personality he is more scientific and treats Elliot with some disdain, particularly some of his early works of both fiction and history. With the disappearance of the cauldron from the dig, we have the arrival of naked blue, red-haired zombies that can only be killed in some very specific ways (mainly with the use of Excalibur). Along with the zombies we have the beserkers who are not naked or blue but just as lethal and the regulars who are drug crazed regular people who also pose a danger to the world at large. Intermingled with the main action packed plot are the relationships Elliot has with his brother, their dead father, his ex-wife and the search for the lady of the lake, modern day Arthur, Lancelot, and  Merlin.

Would I recommend this book – I certainly would, particularly if you enjoy fantasy, zombies, historical fiction and a book full of action. My only criticism of the book was that at times Americanisms were used in an English setting, words used in dialogue that an English man would not use and a couple of sentences I had to reread several times to understand the meaning. An American reader would perhaps not have stumbled over these at all. Saying that, these were rare and minor in nature and did not detract from my enjoyment of the novel.

I began my working career as a reluctant potato peeler whilst waiting to commence my training as a student nurse. On completion I worked mainly in intensive care/coronary care; finishing my hospital career as clinical nurse educator in intensive care. A life changing period as a resort owner/manager on the island of Tanna in Vanuatu was followed by recovery time as a farmer at Bucca Wauka. Having discovered I was no farmer and vowing never again to own an animal bigger than myself I took on the Barrington General Store. Here we also ran a five star restaurant. Working the shop of a day 7am - 6pm followed by the restaurant until late was surprisingly more stressful than Tanna. On the sale we decided to retire and renovate our house with the help of a builder friend. Now believing we knew everything about building we set to constructing our own house. Just finished a coal mine decided to set up in our backyard. Definitely time to retire we moved to Queensland. I had been writing a manuscript for some time. In the desire to complete this I enrolled in a post grad certificate in creative Industries which I completed 2013. I followed this by doing a Master of Arts by research graduating in 2017. Now I live to write and write to live.
View all posts by Irene Waters 19 Writer Memoirist →
This entry was posted in Book reviews, photography and tagged book review, irene waters, King Arthur, The Fireborn, Trent McDonald, zombies. Bookmark the permalink.

15 Responses to The Fireborn: A book Review