Can You Hear Me: Book Review 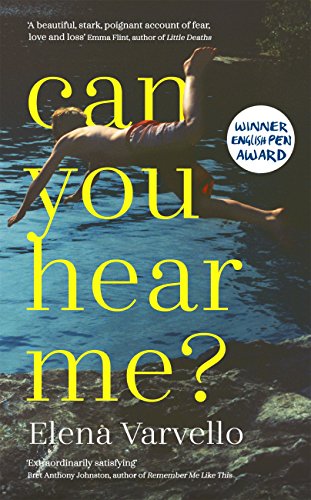 “In the summer of 1978, the summer I met Anna Trabuio, my father took a girl into the woods.”

Doesn’t the first line of Can you hear me? by Elena Varvello make you want to read on? When my husband raved about it saying it was the best book he’d read in the last 20 years I knew I had to read it. Had he just read nothing of much quality or was he right. On reading the first line I knew I was hooked and read the book in a very short time – in other words I found it hard to put down. Although the narrator, a boy called Elia, gives you the climax in this first line I still wanted to know more. I needed to know about the summer — the how and the why and the consequences.

For me it was predominantly a coming of age novel set amongst the back drop of a father struggling with a mental illness brought on by being made redundant, a passive mother, a friend who is not approved  of  by his mother for reasons she is hiding and that friend’s mother, Anna Trabuio who has a past too that is being hidden and who Elia dreams of. Suspense comes in the form of a missing boy and the girl that his father took into the woods and the undercurrents that flow around each character. I found all the characters well -developed and totally believable. I shared Elia’s fears, I understood his dreams. It is a story of knowledge and knowing its limits. This is summed up when Anna tells Elia, “its more the things you don’t know than the ones you thought you knew. In the end, you realise you knew nothing at all.”

Unlike the last couple of books reviewed, this was not lyrical writing. Descriptions were sparse, sentences were short. Despite this, or perhaps because of this, the visual images were vivid and it took you inside the head more than marvelling at the surroundings. It was set in Italy but to me place was unimportant. It could have been anywhere.

It is difficult to be more specific without spoilers for I have to admit I was surprised at the end. Would I recommend this book – absolutely. I don’t think it was the best book I’ve read in the last 20 years but it certainly got me in and  had me turning pages.

In a letter to the reader  Varvello tells that this book is personal as it is the story of her own father who suffered from bipolar disorder. She wrote in this letter ” I loved him and I didn’t know him and I couldn’t reach him anymore. That’s when I began transforming reality into fiction.”  That it is a personal story does not come across on reading but the depth of the characters and the author’s ability to write these conditions certainly does.

Note: This book was translated from Italian to English by Alex Valente. It won an English Pen Award.

I began my working career as a reluctant potato peeler whilst waiting to commence my training as a student nurse. On completion I worked mainly in intensive care/coronary care; finishing my hospital career as clinical nurse educator in intensive care. A life changing period as a resort owner/manager on the island of Tanna in Vanuatu was followed by recovery time as a farmer at Bucca Wauka. Having discovered I was no farmer and vowing never again to own an animal bigger than myself I took on the Barrington General Store. Here we also ran a five star restaurant. Working the shop of a day 7am - 6pm followed by the restaurant until late was surprisingly more stressful than Tanna. On the sale we decided to retire and renovate our house with the help of a builder friend. Now believing we knew everything about building we set to constructing our own house. Just finished a coal mine decided to set up in our backyard. Definitely time to retire we moved to Queensland. I had been writing a manuscript for some time. In the desire to complete this I enrolled in a post grad certificate in creative Industries which I completed 2013. I followed this by doing a Master of Arts by research graduating in 2017. Now I live to write and write to live.
View all posts by Irene Waters 19 Writer Memoirist →
This entry was posted in Book reviews and tagged Alex Valente, bildungsroman, book review, Can you hear me?, coming of age, Elena Vervello, irene waters, mental illness. Bookmark the permalink.

2 Responses to Can You Hear Me: Book Review