Welcome and come on in. Let’s get settled with a cup of tea or coffee and then we’ ll see how I week was. Personally I have had a good week.

If we were having coffee I’d tell you that to some extent our week has a routine to it. Monday morning we go to yoga. We both feel better for doing some exercise and Roger feels that he is feeling the benefit in his shoulder. I have also put a walking app on my phone. Now it is not just the camera that drives Roger mad but the constant checking I do to see how many steps I take. I don’t have to worry because I do 95% more steps than other users of the app. This is due to walking the dogs, dancing and running up and down the steps fairly often. The app also comes with a 7 minute workout which I try to do (even though I change some of the exercises to suit) each day.  Other activities which make up our routine is art appreciation, golf, dancing and lunch with Mum.

If we were having coffee I’d tell you that a good friend from Sydney is visiting. She arrived on Friday and leaves on Thursday and as luck would have it the weatherman is giving us wet weather for the entire period. We were caught in a torrential downpour on our way to the Farmer’s market and it was huge puddles to negotiate when we did finally get there. Due to the weather the stall holders were at a minimum and it was too uncomfortable to have coffee. Fortunately the weather cleared and we managed to walk along the river. So calming. 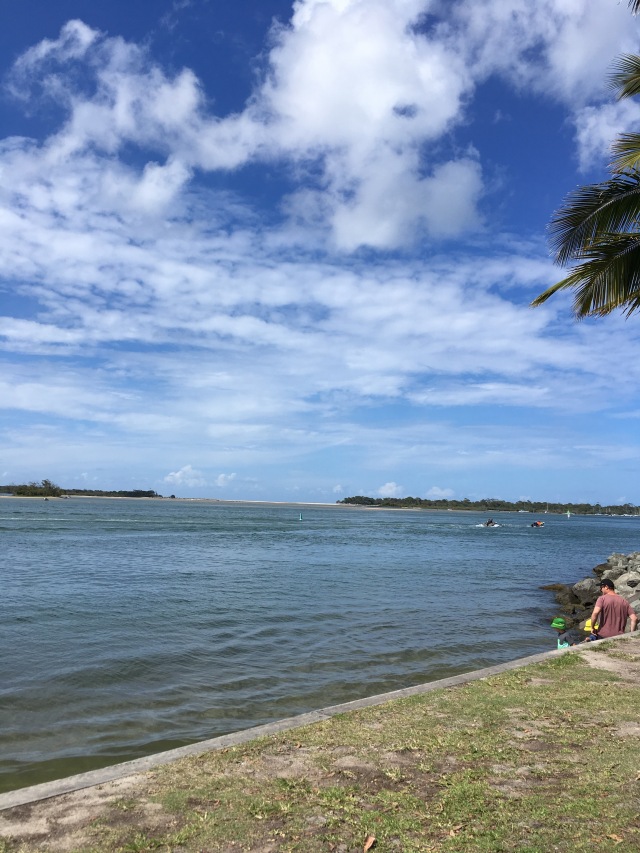 But apart from loving having a good friend visit I obtained my biggest buzz of the week from a seminar I went to at the university. I was invited to attend but wasn’t told why. I listened to the speaker who was truly inspirational and you will hear more about this over coming weeks. It was about the hero’s journey which all writers know about but this was put in such a way it was truly inspirational. Afterwards the majority of people left and I was invited to stay on with six other people. I was being invited to be one of two creative writers for a book that was planned. I have to say I am quite excited about it. I am not going to talk about it today as it is in its infancy and I don’t want to jump the gun.

I am still reading the same book  – but will finiish it this week. I’m looking forward to moving on. I haven’t been to any good films of late but I believe we are going to see the new Murder on the Orient Express during the week. Now it is your turn. How was your week? Has your weather been warmer/colder, wetter/drier. Have you read any good books or seen any good films?  Thank you for dropping in for coffee, it is lovely to see you. Thanks to our host eclecticali  who is our host of the weekend coffee share.

I began my working career as a reluctant potato peeler whilst waiting to commence my training as a student nurse. On completion I worked mainly in intensive care/coronary care; finishing my hospital career as clinical nurse educator in intensive care. A life changing period as a resort owner/manager on the island of Tanna in Vanuatu was followed by recovery time as a farmer at Bucca Wauka. Having discovered I was no farmer and vowing never again to own an animal bigger than myself I took on the Barrington General Store. Here we also ran a five star restaurant. Working the shop of a day 7am - 6pm followed by the restaurant until late was surprisingly more stressful than Tanna. On the sale we decided to retire and renovate our house with the help of a builder friend. Now believing we knew everything about building we set to constructing our own house. Just finished a coal mine decided to set up in our backyard. Definitely time to retire we moved to Queensland. I had been writing a manuscript for some time. In the desire to complete this I enrolled in a post grad certificate in creative Industries which I completed 2013. I followed this by doing a Master of Arts by research graduating in 2017. Now I live to write and write to live.
View all posts by Irene Waters 19 Writer Memoirist →
This entry was posted in daily events, photography, Weekend Coffee Share and tagged #weekendcoffeeshare, daily events, diary, irene waters, weekend coffee share. Bookmark the permalink.