Welcome and come on in. Let’s get settled with a cup of tea or coffee and then I’ll try and remember the week I’ve had. It seems that as the weeks go by I am feeling more relaxed, more on top of life and generally in a good space. This seems to be working well for creativity and I am getting some writing and editing done.

If we were having coffee I’d tell you that on Tuesday we went down to Brisbane with our U3A art group on the bus. Nothing was planned for the day and we took the opportunity to go to the art gallery, the maritime museum, have a wander through town and watch the Melbourne Cup and then spend time in the Queensland State Library until it was time to go home on the bus. Going by bus makes it such a relaxing day and cheaper than having to drive and pay for parking. My first task was to find out about a sculpture in the library grounds.

This statue is called “The Visitation” by  Sir Jacob Epstein  (1926). It was in the Tate modern but I gather Queensland Art Gallery purchased it in 1968. (I could be wrong about that.) It depicts the Virgin Mary going to tell her sister of her pregnancy.

If we were having coffee I’d tell you that I love going to the art gallery. There are those artworks that always seem to be there and there is always new things to wonder at, like, dislike, ponder the meaning and the space is such a relaxing one to wander. It has given me something to ponder and I will write a post on this soon.

The Maritime museum was worth the visit although it was small and insignificant compared to other maritime museums I have visited its main exhibition was the decomissioned SS Diamantina a River-class frigate which is the only vessel of this type left in the world. This was fully accessible as it sat in the heritage listed dry dock.They had some other exhibits that are also post worthy and I will get round to them sometime soon.

If we were having coffee I’d tell you that from Wednesday it rained on and off for the rest of the week. It makes the garden look fresh and gives me a break from watering. I am eating the tomatos which are so much tastier than the bought ones. Roger bought me a wasabi plant and I am using the leaves and stalks in salads. It is the stalk that is used for wasabi paste. Fresh, it is not as hot as that in the tube but it still has a bit of a kick.

Thursday we had lunch for a friend’s birthday and Friday our normal lunch out with Mum. After lunch we decided we would watch Breakfast at Tiffanys. I love the fashions she wore in this film and I could look at Audrey Hepburn all day, or I thought I could, as I was asleep for I have no idea how long. So was Mum. I saw the beginning and the end.

If we were having coffee I’d tell you that I went dancing – lesson Friday night and social Saturday night. Saturday night was a night of ups and downs. I went flat on my side during one of the dances. It is not a pretty sight watching me struggle up. Nothing was hurt other than my pride. All night I looked at this chap believing I knew him from somewhere. I suddenly twigged where. I didn’t know him but he married a girl I used to dance with thirty odd years ago. I had not had contact since we left Sydney in 1992. I knew they had got married but I couldn’t see her so I asked him “Did you used to dance in Sydney.” When I got the answer in the affirmative I asked “Do you know a Claire.” “Yes” he said “I’m married to Claire” and he pointed behind me. I hadn’t recognised her and neither of them recognised me but what a buzz I got from catching up with someone from so long ago.

Today Roger was going a bit stir crazy so we went for a drive to Cooroy and took the dogs for a walk. Bundy loved the fresh smells and piddled on every tree we passed. 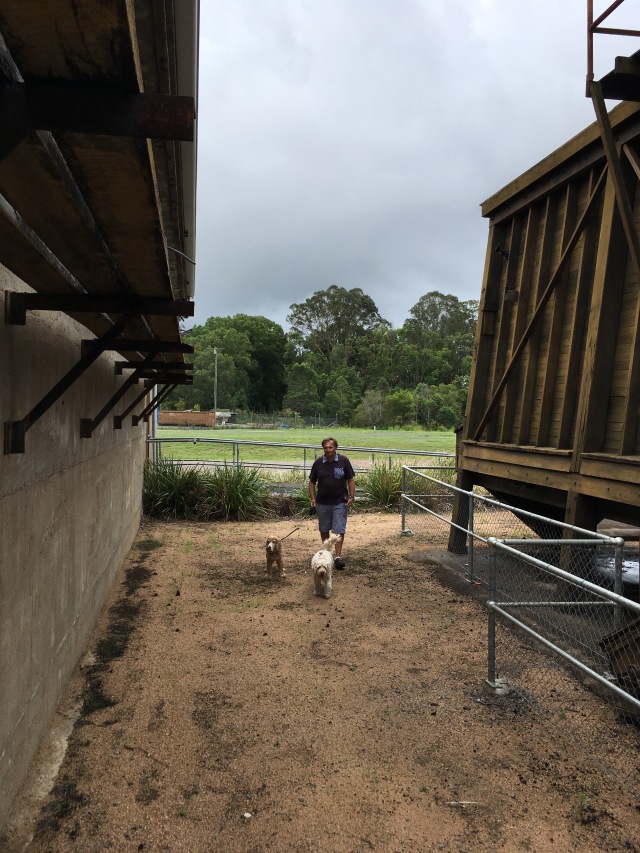 Now it is your turn. How was your week? Has your weather been warmer/colder, wetter/drier. Have you read any good books or seen any good films?  Thank you for dropping in for coffee, it is lovely to see you. Thanks to our host eclecticali  who has taken on the hosting of the weekend coffee share.

I began my working career as a reluctant potato peeler whilst waiting to commence my training as a student nurse. On completion I worked mainly in intensive care/coronary care; finishing my hospital career as clinical nurse educator in intensive care. A life changing period as a resort owner/manager on the island of Tanna in Vanuatu was followed by recovery time as a farmer at Bucca Wauka. Having discovered I was no farmer and vowing never again to own an animal bigger than myself I took on the Barrington General Store. Here we also ran a five star restaurant. Working the shop of a day 7am - 6pm followed by the restaurant until late was surprisingly more stressful than Tanna. On the sale we decided to retire and renovate our house with the help of a builder friend. Now believing we knew everything about building we set to constructing our own house. Just finished a coal mine decided to set up in our backyard. Definitely time to retire we moved to Queensland. I had been writing a manuscript for some time. In the desire to complete this I enrolled in a post grad certificate in creative Industries which I completed 2013. I followed this by doing a Master of Arts by research graduating in 2017. Now I live to write and write to live.
View all posts by Irene Waters 19 Writer Memoirist →
This entry was posted in daily events, photography, Weekend Coffee Share and tagged #weekendcoffeeshare, daily events, diary, Epstein, irene waters, Qld art gallery, Qld Maritime museum, The visitation, weekend coffee share. Bookmark the permalink.