The German Girl: A book Review 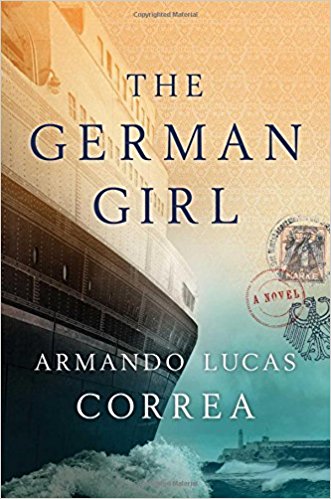 When I read this book I could not help but think of our current world circumstances. In Australia I am ashamed of the way we treat our refugees and can’t understand why those in the places that matter in government are unable to see that the refugees are people like themselves and the trauma that they are putting them through on arrival in Australian waters on top of the trauma they have already suffered in their country of origin will have long lasting effects. Perhaps The German Girl should become compulsory reading for politicians.

This novel is based on an actual event that has scarred several nations. It is told from the perspective of a 12 year old German Jewish girl, Hannah Rosenthal, who had been born into an affluent family. It begins in 1939 with the rise to power of the Nazi party and the confusion that this leads to from a child’s perspective as people that had previously deferred to the child now shun the child. Her only friend 12 year old Leo and she use the streets of Berlin as their playground where Hannah, a keen photographer, takes many photos.

After her Father has been imprisoned on a number of occasions the family decide to escape Germany for the US but as the queue for Ellis Island is long they will have to have a transition period in Cuba. They board the SS St. Louis for the journey. Whilst at sea Cuba decides not to honour the visas that the 900 odd passengers had and refuses to let them land. Hannah and her mother are among the 22 that are allowed to disembark. The remainder of the passengers are returned to Europe, including Hannah’s father and her friend Leo. This has long term ramification for Hannah, who lives in Cuba the remainder of her life.

The other narrator is Anna, Hannah’s great niece, whose Father was killed in the World Trade Centre on the 11th September 2001. She receives a parcel from Hannah which leads to a trip to Havanna which sets her on the path to be the first Rosenthal since 1939 to be free of the horrors the family had suffered.

This book built up the tension effectively from chapter to chapter and was difficult to put down. This showed the plight of displaced people and the way it was written caused a relationship to form between both the narrators and I as reader. The parallels between the relationship both girls had for their fathers and the way that both mothers, grief stricken, took to their beds and the eventual outcome for both mothers were interesting parallels.

This well-written novel spans WWII, the Cuban crisis and the terrorist attack on the World Trade Centre, WWII and the Holocaust are treated from a different angle that many countries tried to hide and have now, in Canada and the US put up monuments to those people who it turned away. This moving book is, in my opinion, well worth reading.

I began my working career as a reluctant potato peeler whilst waiting to commence my training as a student nurse. On completion I worked mainly in intensive care/coronary care; finishing my hospital career as clinical nurse educator in intensive care. A life changing period as a resort owner/manager on the island of Tanna in Vanuatu was followed by recovery time as a farmer at Bucca Wauka. Having discovered I was no farmer and vowing never again to own an animal bigger than myself I took on the Barrington General Store. Here we also ran a five star restaurant. Working the shop of a day 7am - 6pm followed by the restaurant until late was surprisingly more stressful than Tanna. On the sale we decided to retire and renovate our house with the help of a builder friend. Now believing we knew everything about building we set to constructing our own house. Just finished a coal mine decided to set up in our backyard. Definitely time to retire we moved to Queensland. I had been writing a manuscript for some time. In the desire to complete this I enrolled in a post grad certificate in creative Industries which I completed 2013. I followed this by doing a Master of Arts by research graduating in 2017. Now I live to write and write to live.
View all posts by Irene Waters 19 Writer Memoirist →
This entry was posted in Book reviews and tagged book review, irene waters, The German Girl. Bookmark the permalink.

11 Responses to The German Girl: A book Review