Before the Fall: Book Review 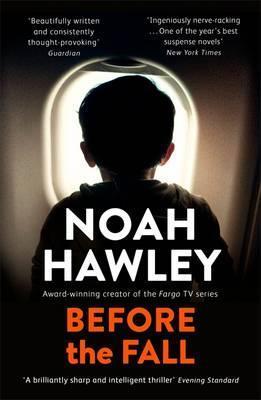 This is a highly readable book by Noah Hawley. The story told starts on a foggy night when a private jet with some very influential and important people, their wives and two children, an artist on the road back from alcoholism and the air crew on board, took off from St Martha’s Vineyard with the destination being New York. Somewhere during the flight it crashes. The only survivors we know of are the artist and a four year old boy. We flash back to each passenger and their life before the fall and return to the survivors and their life after the fall. It was suspense at its best.

Before the Fall  While most of his writing was lyrical some jarred. There were numerous examples of telling, not showing and this, I found, annoyed me greatly. Why did he need to, at the end of the first chapter, write “… none of them has any idea that sixteen minutes from now their plane will crash into the sea.” There were a number of similar examples throughout the book. Why didn’t he build the tension and show us it happening. In retrospect, these tellings, I think , were a very successful strategy, convincing me that the narrator was unreliable and allowed me to sustain hope throughout.

Hawley’s character construction was skilful and as a reader I certainly became involved positively with some and negatively with other characters. The human traits he gave his characters are one that were easily recognised by me as the reader. It was this connection that drove the novel forward and although I was slightly disappointed with the ending (I can’t say more as it will spoil it for anyone who decides to read it) I was also disappointed it was over. I wondered at how my mind could just ignore some pointers because of my own desires.

It was also a story of greed – from the wealthy wanting more, the poor wanting what the wealthy had and the greed of the media. It examined ploys of the media in creating the truth they wanted rather than the truth as it existed. I have always worried that now that news is 24 hours a day that there simply isn’t enough news to fill it up. This book went part of the way to me deciding I am right in that thought. It was a story of desire, the ability to sink to the depths and rise above them, the value of family and the nature of art and creation, memory and identity. Above all it showed the power of hope.

One of my favourite parts was the descriptions in the Chapter ‘Blanco’ and the conclusions Scott, the artist, puts forth as he ponders about the world he is in and the crash he survived. He suggests that perhaps he is a ghost. What did happen on that plane? What happened to the other passengers? If you want to know you’ll have to read it yourself.

I began my working career as a reluctant potato peeler whilst waiting to commence my training as a student nurse. On completion I worked mainly in intensive care/coronary care; finishing my hospital career as clinical nurse educator in intensive care. A life changing period as a resort owner/manager on the island of Tanna in Vanuatu was followed by recovery time as a farmer at Bucca Wauka. Having discovered I was no farmer and vowing never again to own an animal bigger than myself I took on the Barrington General Store. Here we also ran a five star restaurant. Working the shop of a day 7am - 6pm followed by the restaurant until late was surprisingly more stressful than Tanna. On the sale we decided to retire and renovate our house with the help of a builder friend. Now believing we knew everything about building we set to constructing our own house. Just finished a coal mine decided to set up in our backyard. Definitely time to retire we moved to Queensland. I had been writing a manuscript for some time. In the desire to complete this I enrolled in a post grad certificate in creative Industries which I completed 2013. I followed this by doing a Master of Arts by research graduating in 2017. Now I live to write and write to live.
View all posts by Irene Waters 19 Writer Memoirist →
This entry was posted in Book reviews and tagged Before the Fall, book review, irene waters, Noah Hawley. Bookmark the permalink.

3 Responses to Before the Fall: Book Review