It seems like ages since I shared coffee with anyone. 1st April to be exact and so much has happened but don’t worry, you are safe to come in. I’m not going to bore you with everything that has been going on since we last shared a cuppa.

We have now been in our new place nearly three months. I am quite settled. Roger on the other hand is struggling with the smaller size. He feels there is nowhere to escape to and he hate living in one room. We do have more than one room but once he is downstairs he tends to stay there. At first he was at me to move but I have refused to budge for at least two years. I’m hoping by then he will have acclimatised and be quite happy to stay put. He decided then that we had to brighten it up so we set to painting the ceiling (which had been painted a beige colour identical to the walls) white and then painting the walls another shade of white. During this he fell off the ladder breaking his toe, multiple bruises and a huge black eye. Luckily all but his toe have recovered. We hadn’t finished the painting before Roger decided the floor had to go. This had to be done cheaply so it meant finding a flooring place selling a discontinued product, hiring a truck and picking it up ourselves and then laying it ourselves. We picked up over 780 kgs of planks and I have to say I was worried when I saw how far the ute sunk onto its axles. It took a lot of working out where we should start but once we got going it went down smoothly. Hopefully we have done it right and won’t regret it in the long term. We do however much prefer the richness of colour, and it is easier to see Muffin on it. 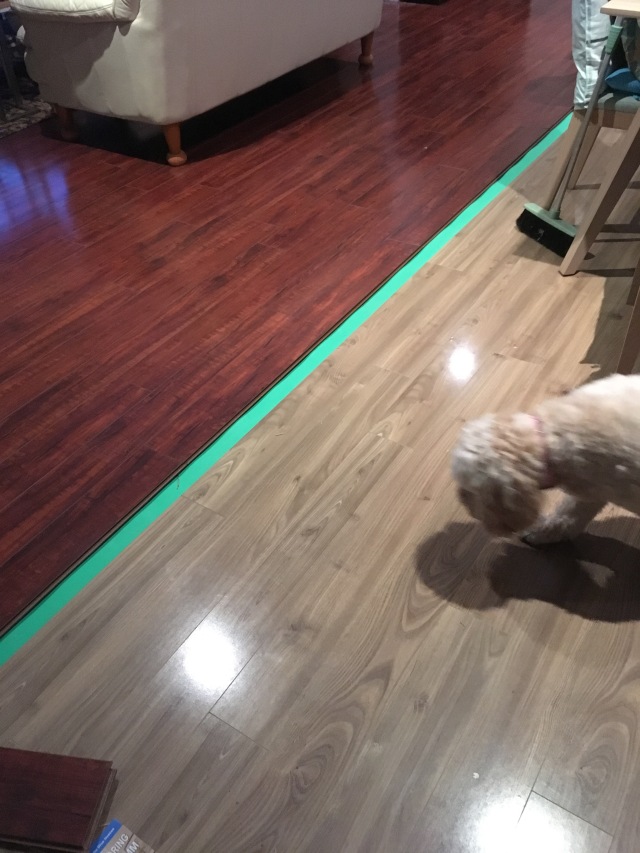 We are half way and I hope we will be close to finishing it by the weekend. I am looking forward to getting my house back again. At the moment there are skirting boards sitting on the kitchen bench tops and the furniture is all over the place. At least the hardest part, under the fish tank has been done and we moved the tank here and there without springing any leaks. yeah!

Muffin and I continue dog training. Sadly on Wednesday night we had to farewell one of the dogs in my class Buff. He was a massive dog and not quite a pussy cat. His owner used to have a few beers before coming. She said it helped her relax and if she was chilled out then Buff followed suit. Most of us have been in the position of losing a beloved friend and our hearts went out to her and shared her grief. RIP Buff.

If we were having coffee I’d also tell you about the trip I had to Sydney with my Mum, but as I have already written a post about that I shall just direct you there instead and show you the photo of Mum and me accepting the award on behalf of my brother. A very proud moment and one that we will both treasure.

I am currently reading Before the Fall by Noah Hawley which I will review when I have finished it. I am enjoying it however. I haven’t had time to go to the cinema so I think that is all from me this week.

Now it is your turn. How was your week? Has your weather been warmer/colder, wetter/drier. Have you read any good books or seen any good films?  Thank you for dropping in for coffee and thank you to Nerd in the Brain for hosting our weekend coffee. Other places to drop in for coffee can be found here. Hope to see you next week.

I began my working career as a reluctant potato peeler whilst waiting to commence my training as a student nurse. On completion I worked mainly in intensive care/coronary care; finishing my hospital career as clinical nurse educator in intensive care. A life changing period as a resort owner/manager on the island of Tanna in Vanuatu was followed by recovery time as a farmer at Bucca Wauka. Having discovered I was no farmer and vowing never again to own an animal bigger than myself I took on the Barrington General Store. Here we also ran a five star restaurant. Working the shop of a day 7am - 6pm followed by the restaurant until late was surprisingly more stressful than Tanna. On the sale we decided to retire and renovate our house with the help of a builder friend. Now believing we knew everything about building we set to constructing our own house. Just finished a coal mine decided to set up in our backyard. Definitely time to retire we moved to Queensland. I had been writing a manuscript for some time. In the desire to complete this I enrolled in a post grad certificate in creative Industries which I completed 2013. I followed this by doing a Master of Arts by research graduating in 2017. Now I live to write and write to live.
View all posts by Irene Waters 19 Writer Memoirist →
This entry was posted in daily events, Memoir, photography, Weekend Coffee Share and tagged #weekendcoffeeshare, diary, irene waters, weekend coffee share. Bookmark the permalink.