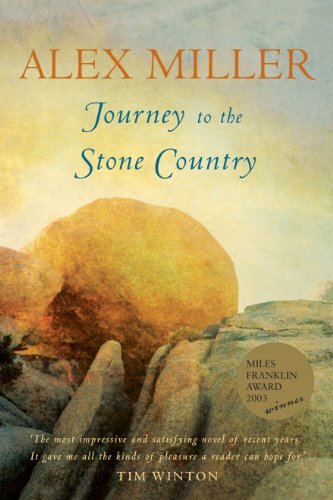 Alex Miller is one of Australia’s foremost modern writers of literary fiction. Born in England in 1936 he emmigrated to Australia by himself at the age of 16. His first novel was published in 1988 and he has won several of our prestigious awards since then including the most coveted Miles Franklin Award (awarded for literary fiction which presents Australia in any of its many phases) twice, shortlisted 4 times and long listed twice, the Commonwealth Writer’s Prize and the New South Wales Premier’s Literary Award and numerous others.

I have read three of his eleven novels – (in the order I read them) Journey to the Stone Country (2002), Lovesong (2009) and The Sitters (1995). All of them I enjoyed thoroughly and all were so different to each other.

Journey to the Stone Country which on the surface is a tale of recovery and romance but twists much deeper delving in the impermanence of cultures, both black and white and the continuation of the land beyond any cultures influence. I read this a long time ago so forgive me if my memory is fuzzy. It looks inside the people at similar places in our own psyche. Annabell in her 40s has her world thrown upside down when she discovers her academic husband is having an affair with one of his students. She flees Melbourne for Far North Queensland and takes on a job with a friend looking for ‘significant remains’ on remote outback land that her family once owned. She soon meets Bo Rennie an aboriginal ringer with whom she had grown up. These characters are based on a true story. This novel looks at black and white and the duality of the world – good vs evil, good/bad white people, good/bad black people, exploitation/ reconciliation, white culture/black culture. He bravely ignores political correctness allowing his characters to be authentically human and permits the examination of racism and differing cultures that could be a key to forward movement for both races. The only thing that annoyed me with this book which won the Miles Franklin award 2003 was the incessant cigarette smoking. His descriptions of country were superb. 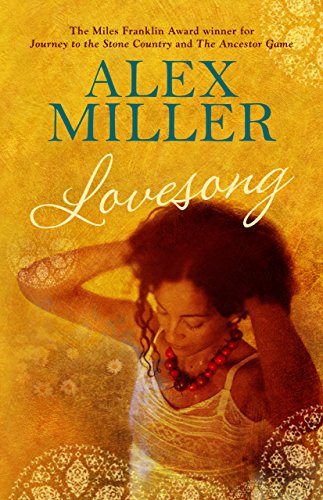 I read Lovesong last year and was struck by how different this novel was from the last I had read. This book was set in Paris, North Africa and suburban Melbourne. Commencing in a Tunisian cafe for North African abbattoir worker’s we learn of the lives of the cafe’s owner widow Houria and her nice Sabiha. Tourists rarely came to this  precinct of Paris let alone enter the cafe until lost Australian John Patterner took shelter from the rain. It tells of the love that developed between him and Sabiha and the tragedy that unfolded, seeing them eventually relocate to Melbourne opening a bakery/coffee shop in the suburbs. Here they met Ken, an ageing writer, who on befriending  John sees a love story waiting to be written and learns of the tragedy bit by bit.  Again these characters are human and the beauty of the story is in the moral frailties the characters exhibit that we can recognise in ourselves. We are caught hook line and sinker and then compelled to take a stand. This book deserved the six awards it won and its shortlisting for the Miles Franklin. 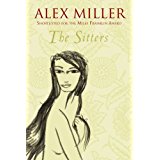 It was with pleasurable anticipation that I started reading The Sitters last week and I absolutely loved it. This novella is written in the first person was stream of conscious prose. It tells the story of an ageing currently uninspired artist who meets a woman by chance and is inspired to do her portrait. It is the story of turning the woman from a likeness to a portrait and in the process we examine family relationships and the self. This is the best book on the creative process I have read and I found myself questioning my own creative process. It is set in Canberra where he meets Jessica at the university and also in the Araluen valley. Again the description of the Australian countryside is vivid and the sense of place everpresent. Describing an artists view he draws images in words:

… The tourists can discover the hidden beauties of Lower Araluen, the picturesque and the rustic, the few remains of another Australia that no one really belongs to any more, but which is still there, hanging on in places like this, and managing to believe in itself by dismissing everything else.

Every now and then an eddy of air sets the leaves of the redgum in motion and the light passes back and forth unsteadily across her features, the way light might pass mysteriously across the bed of a river, its hues diluted and made more lucid and slowed by the weight of the water. Back and forth, the shadow of someone’s hand at the window. A gesture from outside. An invitation. A summons. Someone calling her out of herself. The leaves of the redgum hang down in great airy clusters from an enormous height  and they bend back an forth in the warm eddies of air, glinting. Finely beaten tin. page 62-63

The relationship between sitter and artist remains ambiguous throughout although there is a sensuousness in the prose.

Of the three I think this is my favourite yet I can remember finding all memorable for more than one reason. I am really looking forward to reading the rest of Alex Miller’s novels. All are available on Amazon.

I began my working career as a reluctant potato peeler whilst waiting to commence my training as a student nurse. On completion I worked mainly in intensive care/coronary care; finishing my hospital career as clinical nurse educator in intensive care. A life changing period as a resort owner/manager on the island of Tanna in Vanuatu was followed by recovery time as a farmer at Bucca Wauka. Having discovered I was no farmer and vowing never again to own an animal bigger than myself I took on the Barrington General Store. Here we also ran a five star restaurant. Working the shop of a day 7am - 6pm followed by the restaurant until late was surprisingly more stressful than Tanna. On the sale we decided to retire and renovate our house with the help of a builder friend. Now believing we knew everything about building we set to constructing our own house. Just finished a coal mine decided to set up in our backyard. Definitely time to retire we moved to Queensland. I had been writing a manuscript for some time. In the desire to complete this I enrolled in a post grad certificate in creative Industries which I completed 2013. I followed this by doing a Master of Arts by research graduating in 2017. Now I live to write and write to live.
View all posts by Irene Waters 19 Writer Memoirist →
This entry was posted in Australia, Book reviews, fiction and tagged Alex Miller, Australia, Australian author, book review, irene waters, Journey to the Stone country, Lovesong, The Sitters. Bookmark the permalink.