Welcome. So glad you managed to make it on such a muggy day. Although the temperature is only 25.9 degree centigrade the perspiration is rolling off me today. It was too much for our elderly spaniel and I had to sit and wait with him whilst Roger went and got the car to take him home. I think that walks up to the coffee shop in the middle of the day are now officially off until winter returns. Luckily we normally do their first walk between  6 and 7 and their afternoon walk after 4pm so it is a bit cooler for those and he goes for a swim in the river as well.

If we were having coffee I’d tell you that after our morning walk I took Muffin to the dog Xmas party down by the river. There were oodles of people enjoying the river. I was surprised because I thought at 7.30am it would be fairly quiet.

There were a lot of owners and dogs but from my Wednesday night class only 4 turned up. I met the service dog that my instructor has been training for work with an autistic child. The dog is being flown to Melbourne tomorrow to start with a young boy. She was telling me that often children who have never spoken will start to talk because of their dog. The animals are taught to recognise inappropriate behaviours, situations of stress and lots of tricks to entertain and give the child immense pride in what his animal can do. It helps to build confidence. The dogs are also taught tracking skills as running away from situations is common with autism. Some of the dogs are taught to recognise the odour of epileptic fits. It is a marvellous service for those that are in need.

If we were having coffee I’d tell you Muffin is a long way from being a service animal of any sort apart from giving lots of love. She is however doing well at training and the other night sat her level 2 exam which we passed with flying colours. She was also good in class as you can see by the photo. We are doing a lot of off lead work and being in such close 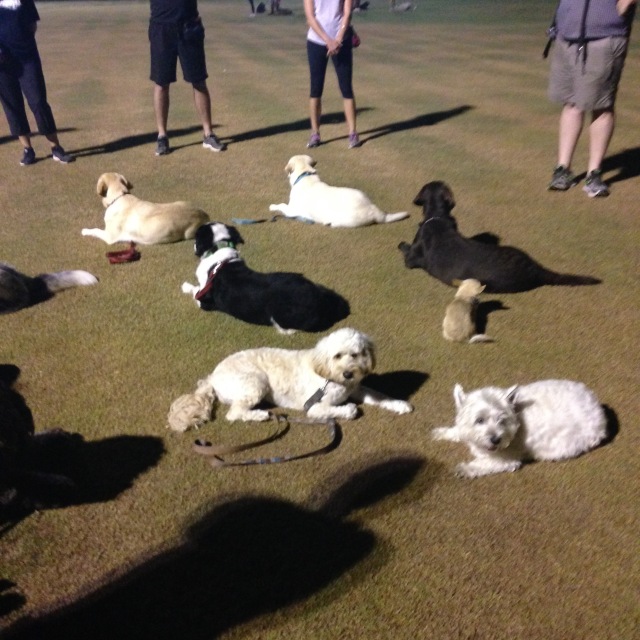 proximity to other dogs and not interracting with them is one of the hardest tasks to do. All the close were very good.

If we were having coffee I’d tell you that we have found accomodation for 6 months. It is only 1 house removed from where we currently are so we will over the next 6 weeks walk our stuff down the road. Although we are paying rent for a month longer than we wanted to it is a real relief to know that we aren’t going to be homeless. Finding a rental over Christmas and with our cruise thrown into the mix and 2 dogs I have to admit I was having a few sleepless nights at the thought.

If we were having coffee I’d tell you that my week has alternated between work on my manuscript and packing boxes. I know that is what I have been doing for weeks now and even I am getting bored with the whole thing. I have read a book called The Paperchase by Marcel Theroux which won the Somerset Maugham award in 2002. He is the middle son of Paul Theroux and seems to have inherited his wonderful language and storytelling skills. It was a mystery novel with a difference which I won’t reveal but it got me in and I read it quickly.

That is probably about it for me this week. How about you? How has your week been? Did you have a good Thanksgiving for those of you in the States? How has your weather been? Any good books or films to recomend? Gosh I have been remiss. Would you like a cup of something before you go?  Thanks Diana for hosting our coffee shares.

I began my working career as a reluctant potato peeler whilst waiting to commence my training as a student nurse. On completion I worked mainly in intensive care/coronary care; finishing my hospital career as clinical nurse educator in intensive care. A life changing period as a resort owner/manager on the island of Tanna in Vanuatu was followed by recovery time as a farmer at Bucca Wauka. Having discovered I was no farmer and vowing never again to own an animal bigger than myself I took on the Barrington General Store. Here we also ran a five star restaurant. Working the shop of a day 7am - 6pm followed by the restaurant until late was surprisingly more stressful than Tanna. On the sale we decided to retire and renovate our house with the help of a builder friend. Now believing we knew everything about building we set to constructing our own house. Just finished a coal mine decided to set up in our backyard. Definitely time to retire we moved to Queensland. I had been writing a manuscript for some time. In the desire to complete this I enrolled in a post grad certificate in creative Industries which I completed 2013. I followed this by doing a Master of Arts by research graduating in 2017. Now I live to write and write to live.
View all posts by Irene Waters 19 Writer Memoirist →
This entry was posted in photography, Weekend Coffee Share and tagged Dog training, irene waters, Photography, weekend coffee share. Bookmark the permalink.