Black and White Sunday: Across

The Romans were good at building bridges across things. The Pont du Gard (above) which was built by the Romans as part of the 50km long Nimes aqueduct to go across the Gorge of the Gardon River.  It was built in the 1st century AD to carry water from Uzes to Nimes and is the highest (48.8 metres)and most well preserved of the aqueduct bridges. Probably because it was also used as a toll bridge over the river for many years after it was stopped being used for water. The precision of the engineers of Roman times is to be marvelled at as this aqueduct has a fall of only 56 feet over the 50 kms and the bridge itself has a drop of only 2.5 cms. 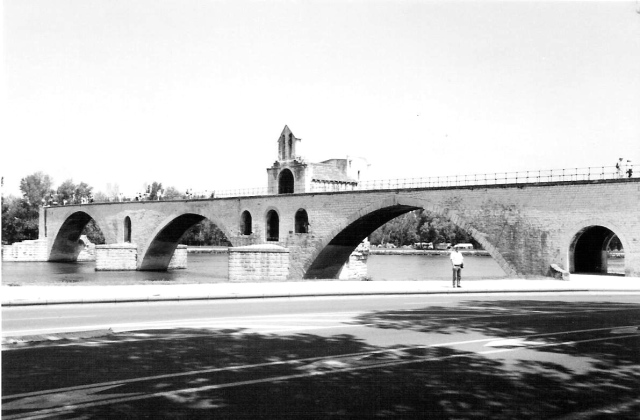 This bridge is considerably older being built in mediaeval times (1177 – 11850). It go across the Rhone joining Villeneuve-les-Avignon and Avignon. A chapel was built in the middle of it. This was  a costly bridge to maintain as the arches had a habit of collapsing when the Rhone flooded. It was the inspiration for the song “Sur le pont d’Avignon.”

Both these bridges which go across rivers have been World Heritage listed.

In response to Black and White Sunday

I began my working career as a reluctant potato peeler whilst waiting to commence my training as a student nurse. On completion I worked mainly in intensive care/coronary care; finishing my hospital career as clinical nurse educator in intensive care. A life changing period as a resort owner/manager on the island of Tanna in Vanuatu was followed by recovery time as a farmer at Bucca Wauka. Having discovered I was no farmer and vowing never again to own an animal bigger than myself I took on the Barrington General Store. Here we also ran a five star restaurant. Working the shop of a day 7am - 6pm followed by the restaurant until late was surprisingly more stressful than Tanna. On the sale we decided to retire and renovate our house with the help of a builder friend. Now believing we knew everything about building we set to constructing our own house. Just finished a coal mine decided to set up in our backyard. Definitely time to retire we moved to Queensland. I had been writing a manuscript for some time. In the desire to complete this I enrolled in a post grad certificate in creative Industries which I completed 2013. I followed this by doing a Master of Arts by research graduating in 2017. Now I live to write and write to live.
View all posts by Irene Waters 19 Writer Memoirist →
This entry was posted in Cee's Black and white Challenge, photography, travel and tagged black and white photography, Black and white Sunday, France, irene waters, Photography. Bookmark the permalink.

13 Responses to Black and White Sunday: Across