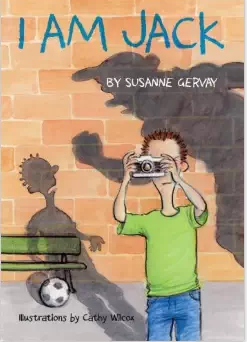 Susanne Gervay – I am Jack

Writing about bullying I found very difficult. Although I didn’t feel as though I fitted in at school I wasn’t bullied. My brother tells me that he was but has yet to tell me the way which he dealt with it. It has become a huge problem however, for many children (1 in 4) with more than a few suicides as a result.

Australian author, Susanne Gervay, does it very well. She writes of her book  “Jack didn’t understand how he ended up targeted, isolated, bullied, until it wasn’t funny anymore. He was afraid, powerless, victimised.  When the parent of Anna, Jack’s friend rang to tell Susanne that her son was in deep trouble, she could hardly breathe with the pain of it.

It was a hard journey to win against bullying, but Jack did because the secrecy was broken, because his mother stood beside him, his family, his friends, his teacher and school were there. His mates came back and he found himself again and Jack fought for who he was.”

She has also written a one man play which can be watched below.

“You have to Charles. This is the third time this week.”

“Okay.” They heard him banging on the drums as they left.

“He’s behind with his school work, he doesn’t mix”

“I’ve heard  Imagine Dragons will be at assembly today.” The words and excitement buzzed around the playground and the hall filled quicker than normal.

A hush settled. Charles smiled. The children smiled back, at their hero.

Why this band? Dragons have had a fairly large impact on my life in the last couple of weeks (see here) so when looking up teenage bands where it features with the 12th song in top of the hits with Demon I had no choice but to choose this band.

March 11, 2015 prompt: In 99 words (no more, no less) write a story that shows the bully mentality countered with a different, unexpected or kind action. Bullies can be known or incognito; Goliaths or small-minded; in-person or online. Think of ways to unplug a bully’s power. Show characters with strength and dignity and even humor.

Respond by March 17, 2015 to be included in the weekly compilation.Rules are here. All writers are welcome!

I began my working career as a reluctant potato peeler whilst waiting to commence my training as a student nurse. On completion I worked mainly in intensive care/coronary care; finishing my hospital career as clinical nurse educator in intensive care. A life changing period as a resort owner/manager on the island of Tanna in Vanuatu was followed by recovery time as a farmer at Bucca Wauka. Having discovered I was no farmer and vowing never again to own an animal bigger than myself I took on the Barrington General Store. Here we also ran a five star restaurant. Working the shop of a day 7am - 6pm followed by the restaurant until late was surprisingly more stressful than Tanna. On the sale we decided to retire and renovate our house with the help of a builder friend. Now believing we knew everything about building we set to constructing our own house. Just finished a coal mine decided to set up in our backyard. Definitely time to retire we moved to Queensland. I had been writing a manuscript for some time. In the desire to complete this I enrolled in a post grad certificate in creative Industries which I completed 2013. I followed this by doing a Master of Arts by research graduating in 2017. Now I live to write and write to live.
View all posts by Irene Waters 19 Writer Memoirist →
This entry was posted in fiction, flash fiction, Writing and tagged #1000speak, 99 word flash fiction, Bullying, I am Jack, Imagine Dragons, irene waters, Susanne Gervay. Bookmark the permalink.