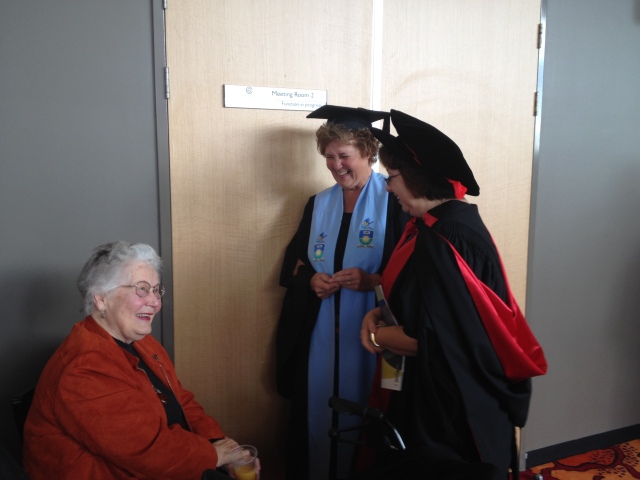 Today was Graduation. Noosa is a small campus which made the ceremony fairly short but with the same pomp and ceremony that you would get with a larger number of people graduating. Our university Central Queensland University is not a small one having approximately 38,000 students with campuses from Cairns to Adelaide and everywhere in between, including Melbourne , Sydney and of course Noosa.

It started with a welcome to land ceremony by an elder of theGubbiGubbi people. I learnt today that for theGubbiGubbi peoplegubbi means no. For the aboriginal people the word for nois doubled to mean the people of the land wheregubbi means no. This is their way of defining their tribal members by language and all languages have a word for no. He spoke eloquently at length and finished off playingthe equivalent of rock and roll on the didgeridoo. Itcan be seen if you wish on this link

Following this the chancellor, dean and guest speaker all spoke followed by a fantastic rendition of “you’ll never walk alone.” Such a great choice of song and so emotively sung by now it is hard holding back the tears. I’m getting old I think.

The presentation of the degrees and post-graduate certificates and diplomas, masters and one PHD occurred next followed by another song “This is the Moment.” Some final words and out we filed with all the pomp and ceremony that one might expect from Oxford.

I was glad that my Mum was there to see it.  The woman with Mum and I is Professor Donna Lee Brien who is my supervisor for my RHD that I am now doing.

I began my working career as a reluctant potato peeler whilst waiting to commence my training as a student nurse. On completion I worked mainly in intensive care/coronary care; finishing my hospital career as clinical nurse educator in intensive care. A life changing period as a resort owner/manager on the island of Tanna in Vanuatu was followed by recovery time as a farmer at Bucca Wauka. Having discovered I was no farmer and vowing never again to own an animal bigger than myself I took on the Barrington General Store. Here we also ran a five star restaurant. Working the shop of a day 7am - 6pm followed by the restaurant until late was surprisingly more stressful than Tanna. On the sale we decided to retire and renovate our house with the help of a builder friend. Now believing we knew everything about building we set to constructing our own house. Just finished a coal mine decided to set up in our backyard. Definitely time to retire we moved to Queensland. I had been writing a manuscript for some time. In the desire to complete this I enrolled in a post grad certificate in creative Industries which I completed 2013. I followed this by doing a Master of Arts by research graduating in 2017. Now I live to write and write to live.
View all posts by Irene Waters 19 Writer Memoirist →
This entry was posted in Awards, daily events, family, Memoir and tagged CQuniversity, graduation, irene waters. Bookmark the permalink.