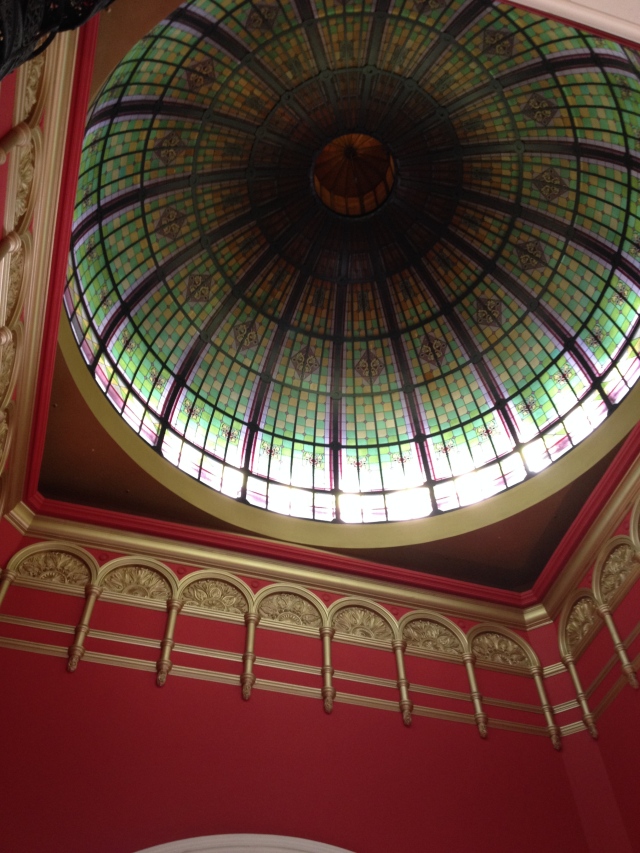 Looking up at the dome of the Queen Victoria Building in Sydney one travels back in time to the late 19th century when architect George McRae built the Romanesque Revival building  as a market place between 1893 and 1898.

Looking down you can see the grand spiral staircase winds down and until the eye is stopped by the beautiful tiles on a lower floor of th building which occupies an entire block near Town Hall Station. It was in a bad state of repair until restoration works were carried out in the late 20th century.

Looking up the mirrored escalator backing reflects the floors below so that you are looking up and looking down at the same time.

Looking down from the top floor where all the ultra expensive shops are you can see the three floors below The friend I was with told me how she and her husband on their last trip looked in a jewellery shop on this level at rings. One for $30,000 appealed and the assistant insisted she try it on despite my friend’s protestations “But I have really bad arthritis and rings are difficult to get off.” The shop assistant insisted it would not be a problem and the ring was put on her finger. With a plane to catch and an expensive ring  stuck on her finger it turned into a bit of a circus as they apparently tried everything with eventual success to get it off.

We decided we would just look up and look down.

I began my working career as a reluctant potato peeler whilst waiting to commence my training as a student nurse. On completion I worked mainly in intensive care/coronary care; finishing my hospital career as clinical nurse educator in intensive care. A life changing period as a resort owner/manager on the island of Tanna in Vanuatu was followed by recovery time as a farmer at Bucca Wauka. Having discovered I was no farmer and vowing never again to own an animal bigger than myself I took on the Barrington General Store. Here we also ran a five star restaurant. Working the shop of a day 7am - 6pm followed by the restaurant until late was surprisingly more stressful than Tanna. On the sale we decided to retire and renovate our house with the help of a builder friend. Now believing we knew everything about building we set to constructing our own house. Just finished a coal mine decided to set up in our backyard. Definitely time to retire we moved to Queensland. I had been writing a manuscript for some time. In the desire to complete this I enrolled in a post grad certificate in creative Industries which I completed 2013. I followed this by doing a Master of Arts by research graduating in 2017. Now I live to write and write to live.
View all posts by Irene Waters 19 Writer Memoirist →
This entry was posted in Look up Look Down, travel and tagged irene waters, Look up look down photograph challenge, Photography, Queen Victoria building, Sydney. Bookmark the permalink.

2 Responses to Look Up Look Down: Queen Victoria Building (Wk 30)