Dare to Dream : A book Review 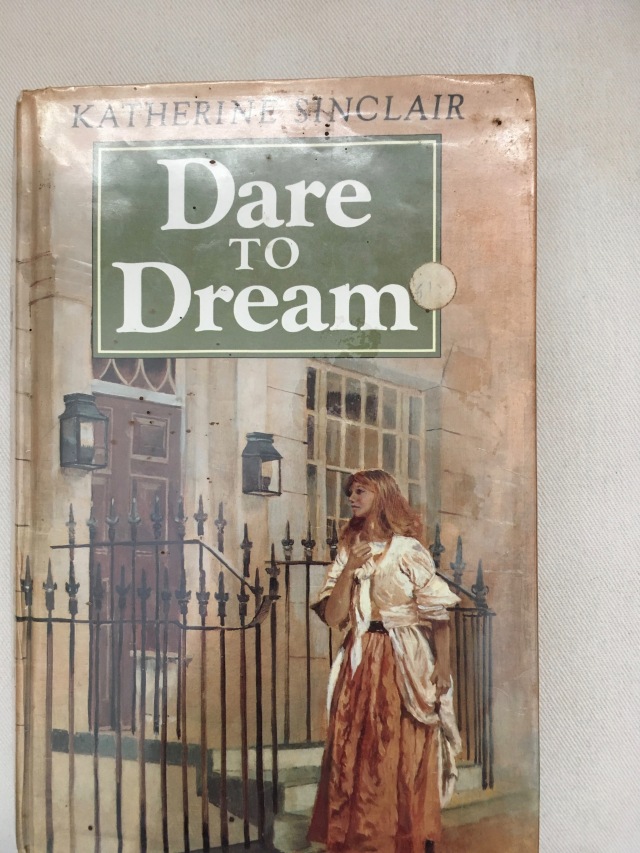 The cover of this hard back version of Katherine Sinclair’s Dare to Dream does not do the book justice. If I was someone who purchased on cover alone I would have thought I was letting myself in to a romantic novel. Although there was some romance it was not the primary theme of the book and it didn’t follow genre guidelines by always ending happily. Instead this was a book that covered three continents, England, China and America and gave an insight into life in each in the 19th century.

I found the storyline intriguing. Emily Farraday, the daughter of a diplomat, finds after the marriage of her father being shipped off to finishing school. En route she is informed that her father has died and she is penniless and has to go into service at a doctor’s premises to pay her fathers debts. The Father in turn is told that his daughter has died, shot in the head by a poacher. He is presented with a body wearing his daughter’s jewellery. Emily captive in the doctor’s house meets Kane, a badly burnt and disfigured violinist who has confined himself in the cellar. Also kept captive in the cellar is a woman, Briony, whose husband has declared her insane so he can carry on affair. Together with Briony’s brother’s help  (who has been alerted by Phin,  Emily’s unknown Chinese half sister) they escape but not without having to kill another servant.  Being wanted for murder they take passage on a boat to New York. Eventually they all end up in San Francisco along with the wicked step mother Tonia. Believe me it was a good yarn.

What I did find fascinating however was the history of America. The boat’s arrival coincided with the Mexican/American war. I’m ashamed to say that I had no idea before reading this book  that California used to be part of Mexico. The descriptions of San Francisco in the 1840s were vivid. It was a social history of a place that I had not previously read anything about and I found the descriptions of Chinese prostitutes kept in cages, floating stores in the harbour, the vigilantes and thugs roaming the streets and much more including the fires that ravaged the town riveting. So much so that it led me to want to know more. With the small amount of research I have done since reading the book I believe that Sinclair did her own research properly.

I had never heard of the author prior to reading this book but those of you that live in America may well have done. Sinclair is a pen name of Joan Dial who is a prolific author who writes under a number of pen names and a number of different genres. This book I would suggest is a hybrid of several genres.

I began my working career as a reluctant potato peeler whilst waiting to commence my training as a student nurse. On completion I worked mainly in intensive care/coronary care; finishing my hospital career as clinical nurse educator in intensive care. A life changing period as a resort owner/manager on the island of Tanna in Vanuatu was followed by recovery time as a farmer at Bucca Wauka. Having discovered I was no farmer and vowing never again to own an animal bigger than myself I took on the Barrington General Store. Here we also ran a five star restaurant. Working the shop of a day 7am - 6pm followed by the restaurant until late was surprisingly more stressful than Tanna. On the sale we decided to retire and renovate our house with the help of a builder friend. Now believing we knew everything about building we set to constructing our own house. Just finished a coal mine decided to set up in our backyard. Definitely time to retire we moved to Queensland. I had been writing a manuscript for some time. In the desire to complete this I enrolled in a post grad certificate in creative Industries which I completed 2013. I followed this by doing a Master of Arts by research graduating in 2017. Now I live to write and write to live.
View all posts by Irene Waters 19 Writer Memoirist →
This entry was posted in Book reviews, Zach and tagged 19th century history, American social history, book review, Chinese social history, Dare to Dream, historical fiction, Joan Dial, Katherine Sinclair, London social history. Bookmark the permalink.

6 Responses to Dare to Dream : A book Review