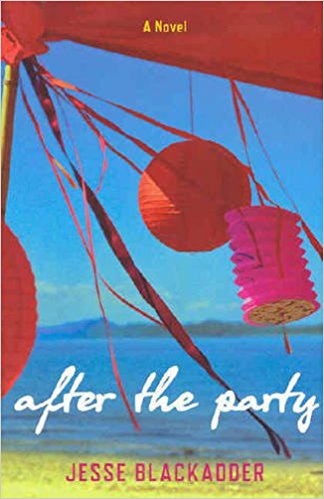 The first Jesse Blackadder book I read was After the Party. I bought my copy at a writer’s festival where I had the honour of hearing Jesse speak. Unfortunately this book is no longer available for purchase. I say unfortunate because it was probably the one that I enjoyed the most (although it was a fine line) for a number of reasons. It described a lifestyle that I knew of but hadn’t fully experienced. It was set in Byron Bay, a place of my youth, and Blackadder’s description of place took me into the tropical steamy forests of the hinterland and to the blue brilliance of the ocean at Byron Bay itself. We meet an ecclectic mix of people at ‘Black Dragon’s’ Dinner Party and follow them after the party. Blackadder captures the culture of Byron Bay – an alternate area where almost anything is accepted. It oozed intrigue, love and thwarted love.

Blackadder describes this book: “Byron Bay, 5 December. On a cool, moonlit night, a group of eccentrics gather for a dinner party hosted by feng shui consultant ‘Black Dragon’. Before the night is through, a relationship will implode, a teenager will overdose, a woman will fall in love with the wrong person, and a robust fish curry will lead to a murder investigation.

As far as parties go, it’s a disaster. But Byron Bay has more surprises in store for Black Dragon, when her perfectly designed life is turned upside-down by an anonymous lover, a possible pregnancy and an unresolved past.

Between the steamy rainforests of the hinterland and the turquoise ocean, colonised by cane toads, fortune tellers, acrobats and tourists, death and destiny hover, waiting to pounce…

Full of subversive wit, After the Party is a sensuous, passionate story about life-changing moments and collisions with fate.”

Her next two books are both historical fiction and she brings to them her passion for history and cold places. 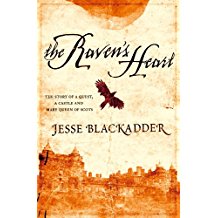 The Raven’s Heart  was born when Blackadder visited Scotland to research her own name. Finding Blackadder House on the edge of the Blackadder River she set the novel in the period where Mary Queen of Scots returns from France after 13 years. The Blackadders have been waiting for her return in the hope that their lands will be restored to them. Alison Blackadder has been living as a boy for her own safety. Her ability to slip in and out of her gender makes her invaluable to the Queen where she has learnt to become a lady in waiting. She finds, like the Queen herself, danger and skullduggery in the intrigues of the court.

I found this an imaginative, fresh look at this period of time and the history and political intrigues that abounded at that time. The novel won the Benjamin Franklin Award for Historical Fiction (USA 2013), the 2013 Golden Crown prize for dramatic fiction, the bronze medal for historical fiction in the Independent Publisher Book Awards (USA 2013) and the Varuna HarperCollins Manuscript Development Award (2010). 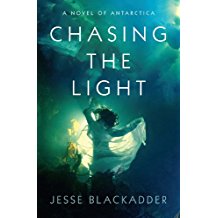 Her third novel Chasing the Light was set in the 1930s and is based on the first woman to visit Antarctica. The book is set in Norway, South Africa and of course Antarctica. It follows the lives of three women Ingrid Christensen, wife of a Norwegian whaler, who left her six children at home to satisfy a lifelong desire to go to Antarctica. Another woman, grieving widow Mathilde tags along albeit unwilling having been forced  to join the expedition by her parents in law. The third woman Lillemor Rachlew tricked her way on board. She wanted to be the first woman to land on Antarctica.

Blackadder’s descriptions of place are superb and she brings alive the scenery of Antarctica, the horrors of whaling and life at sea — effortlessly displaying the vastness of the Southern Ocean and the smallness of the cabins they occupy. She also portrays the power struggles of the women as they battle their way in what is a man’s world.

I would highly recommend this historical fiction for both the story and the lyrical prose.

Jesse Blackadder is certainly a talented Australian Author although, in her adult fiction, she has only used Australia as the scene in one of her novels. She has also written three childrens novels which I have not read Stay: The Last dog in Antactica, Paruku: The Desert Brumby and Dexter the Corageous Koala. These childrens books are linked to the Australian Primary School Curricula and are about real world creatures and their stories.

All three of these books I believe combine good writing with good stories. I am looking forward to the publishing of Jesse’s 4th novel which I believe will happen soon. (images courtesy of Amazon.com)

I began my working career as a reluctant potato peeler whilst waiting to commence my training as a student nurse. On completion I worked mainly in intensive care/coronary care; finishing my hospital career as clinical nurse educator in intensive care. A life changing period as a resort owner/manager on the island of Tanna in Vanuatu was followed by recovery time as a farmer at Bucca Wauka. Having discovered I was no farmer and vowing never again to own an animal bigger than myself I took on the Barrington General Store. Here we also ran a five star restaurant. Working the shop of a day 7am - 6pm followed by the restaurant until late was surprisingly more stressful than Tanna. On the sale we decided to retire and renovate our house with the help of a builder friend. Now believing we knew everything about building we set to constructing our own house. Just finished a coal mine decided to set up in our backyard. Definitely time to retire we moved to Queensland. I had been writing a manuscript for some time. In the desire to complete this I enrolled in a post grad certificate in creative Industries which I completed 2013. I followed this by doing a Master of Arts by research graduating in 2017. Now I live to write and write to live.
View all posts by Irene Waters 19 Writer Memoirist →
This entry was posted in Book reviews and tagged Australian author, book review, Jesse Blackadder. Bookmark the permalink.

5 Responses to Chasing the Light and two other books: Australian Author Jesse Blackadder