The Yards: Trog and other Animals

Over the next couple of weeks the work continued. Once we had our uprights the holes were dug and the posts placed in them. Rocks were found and jammed in at the base and then ramming earth around them packing it in tight around the posts they eventually seemed as solid as if we had used cement. The remaining trees were split in two and formed the rails for the yards, being placed with enough distance from each other so that if we needed to escape quickly from a beast they were easy to climb. The thought of this did not make me feel any better about the role I was to play in our future cattle dealings. 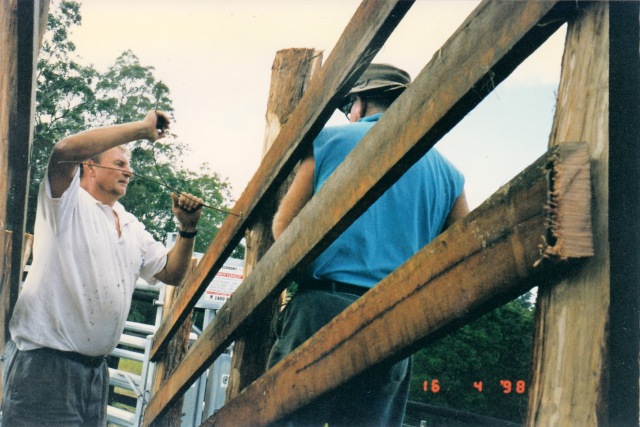 The yard was a square with a gate through which the cattle would be herded in from the paddocks. Another gate led into the race and crush. From the crush  the cattle could exit back into the paddock or  divert up the ramp for loading into the truck. After delivery of the crush, construction of the ramp began. The ramp, constructed  in the same fashion as the yards, with the only difference being, the differing height posts used to get the incline. Darrell had chosen a number of trees that were similar diameter which were then cut to the exact length to fit snugly between either side of the support posts. These were then cut exactly in half and the rounded side placed uppermost. This corrugated effect would help the cattle climb the slope to the truck without slipping. An unexpected advantage of the ramp was we now had a place in the shade that we could sit and have a break. The sun was relentless.

“Yuse got to plant some trees round the yard. Youse gotta have shade when you got cattle locked in ‘n’ makes it better to work. If you buy some trees something like an Aussie Willow. Grows quick ‘n’ give good shade. Or just drive round and pull a couple of branches off a that tree with the red flowers. Stick em in. They’ll grow but not as fast.”

We were now ready, in Darrell’s opinion, to purchase the bull.

I began my working career as a reluctant potato peeler whilst waiting to commence my training as a student nurse. On completion I worked mainly in intensive care/coronary care; finishing my hospital career as clinical nurse educator in intensive care. A life changing period as a resort owner/manager on the island of Tanna in Vanuatu was followed by recovery time as a farmer at Bucca Wauka. Having discovered I was no farmer and vowing never again to own an animal bigger than myself I took on the Barrington General Store. Here we also ran a five star restaurant. Working the shop of a day 7am - 6pm followed by the restaurant until late was surprisingly more stressful than Tanna. On the sale we decided to retire and renovate our house with the help of a builder friend. Now believing we knew everything about building we set to constructing our own house. Just finished a coal mine decided to set up in our backyard. Definitely time to retire we moved to Queensland. I had been writing a manuscript for some time. In the desire to complete this I enrolled in a post grad certificate in creative Industries which I completed 2013. I followed this by doing a Master of Arts by research graduating in 2017. Now I live to write and write to live.
View all posts by Irene Waters 19 Writer Memoirist →
This entry was posted in Memoir, Trog and other Animals and tagged Australia, Cattle, cattle yards, farm, Livestock, memoir, Sparky's blog challenge, Tree. Bookmark the permalink.

3 Responses to The Yards: Trog and other Animals