Mrs Wiggins: Trog and other Animals

“Not to worry” Darrell said when he heard about the loss of our pig.  “I’ve got a lovely pig fer yer. A good baconer. Long and lean. She won’t try and get out. Fact is yer don’t have to pen her. Too big for a dingo ter take.”

“That other one got a bit of wild blood. Yer no have to worry with this one.”

And so Mrs Wiggins arrived on the farm. This time I loved her. She was friendly and very, very pink. Mungo, the dog, and she formed a close attachment. Every morning Mungo would do the rounds of all living creatures to check that all was well. When he was let out of the laundry in the morning he would race up the stairs to our bedroom, sliding on the polished timber floors, legs splayed in his eagerness to greet the person still in bed. Off he would go then to say good morning to the chickens, Snowflake and Mrs Wiggins. We erected a beach umbrella above the dam as we didn’t want Mrs Wiggins to get sunburnt and she and Mungo were often seen lying under it together as though they were at the French Riviera. 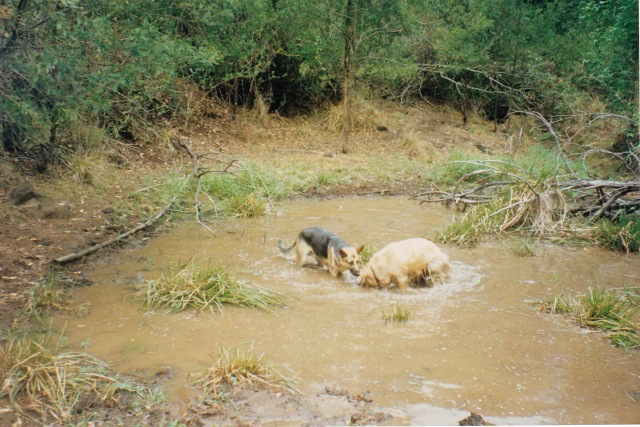 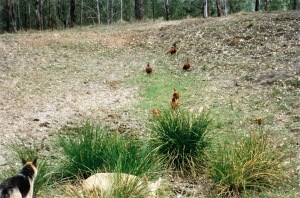 We had enclosed an area under the house for Mungo for the rare occasion that we had to leave the property without him. We arrived home one day to find that Mrs Wiggins had broken the fence separating the house from the paddock and was lying stretched out along the wire on one side of Mungo’s enclosure whilst Mungo was stretched out inside, as close to each other as they could get. This became a regular habit until we arrived home to find Mrs Wiggins had dug up our septic system. The stench was horrendous and she had created a quagmire of grey slimy sludge.

We were in a state of anxiety as we had been working away at being approved for bed and breakfast status and with a development application in to Taree Council we knew an inspector would come and check our facilities any time in the near future.

Having spent that night researching the internet for the mechanics of a septic system we set out the next day to do our version of a transpiration leech field. This is the area that the almost clean liquid waste from the septic tank drains to and in the process of soaking through the soil and feeding roots from the vegetation above does the final cleaning process and eventually returns into the water system as crystal clear water. The system that had been there prior to our pig uprooting it was purely a pipe which discharged the fluid into a shallow gravel pit and then it soaked into the soil from there.  Now it was this grey sludge which we sank into, almost up to our knees. Even our gumboots did little to protect us. We decided that we needed to increase the field in which the fluid drained and to this end we used ag pipe across the top with two L joins at the end and several T sections so we could continue down the hill. This we laid in trenches filled with gravel and we laid shade-cloth over that (to prevent the holes from clogging) followed by more gravel and then covered all of that with soil and planted ground cover over that. It was a huge amount of work, all done by hand, in difficult terrain. Starting at seven am and finishing at five pm we finished in four days.

The building/health inspector arrived two days later. We held our breath but all was declared satisfactory.  Mrs Wiggins was confined to the huge new pen we had built for her  but it didn’t stop Mungo stopping to pass the time of day. 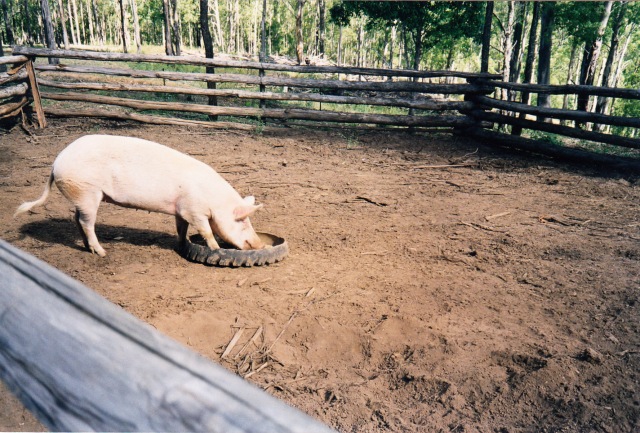 I began my working career as a reluctant potato peeler whilst waiting to commence my training as a student nurse. On completion I worked mainly in intensive care/coronary care; finishing my hospital career as clinical nurse educator in intensive care. A life changing period as a resort owner/manager on the island of Tanna in Vanuatu was followed by recovery time as a farmer at Bucca Wauka. Having discovered I was no farmer and vowing never again to own an animal bigger than myself I took on the Barrington General Store. Here we also ran a five star restaurant. Working the shop of a day 7am - 6pm followed by the restaurant until late was surprisingly more stressful than Tanna. On the sale we decided to retire and renovate our house with the help of a builder friend. Now believing we knew everything about building we set to constructing our own house. Just finished a coal mine decided to set up in our backyard. Definitely time to retire we moved to Queensland. I had been writing a manuscript for some time. In the desire to complete this I enrolled in a post grad certificate in creative Industries which I completed 2013. I followed this by doing a Master of Arts by research graduating in 2017. Now I live to write and write to live.
View all posts by Irene Waters 19 Writer Memoirist →
This entry was posted in Memoir, Trog and other Animals and tagged Australia, Dog, German Shepherd, German Shepherd Dog, memoir, Mungo, Pet, Pig, Septic tank, Sparky's blog challenge, Taree New South Wales, Trog. Bookmark the permalink.

4 Responses to Mrs Wiggins: Trog and other Animals