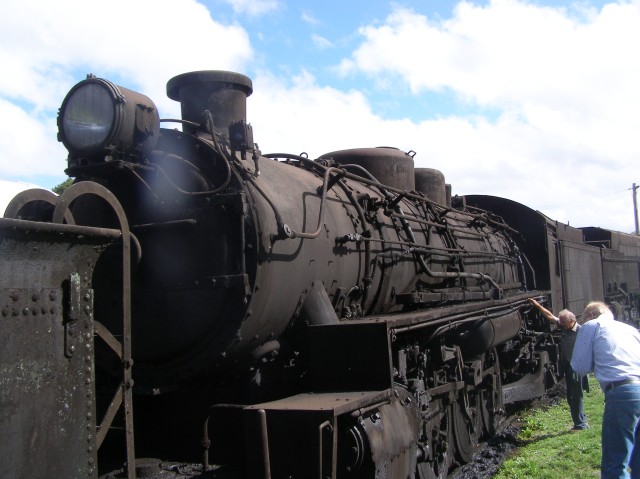 On my recent visit to Dorrigo I expected that the National Parks would be my focus, world heritage sites and waterfalls totally unexpecting the discovery of the as yet unopened railway museum. I had met some friends in Dorrigo and whilst some chose to visit Bellingen luckily, due to an irrational phobia about steep, winding roads, I went with a friend, who had heard some vague rumours that a  museum of railway memorabilia existed in the area. We went in search and came across a display which far exceeded our expectations.

Our first sight was of many railway carriages.  We took the first road along side it but did not find an entry to the museum.

We could see the enormity of the collection (we thought) until we took the road on the other side. Here were over 5o locomotives, oiled to prevent rusting, sitting on the tracks. 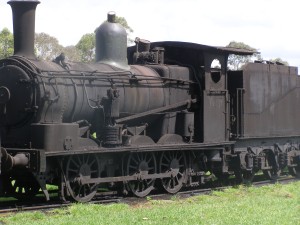 Then further up the road on the other side we saw hundreds of carriage roofs.

Then due to a chance meeting with the Managing Director we learnt about the huge collection.  A full list of the collection and other information is found at

Briefly they have 74 locomotives of which 44 are steam dating from 1877 to 1956 including the BEYER GARRATT type (largest in the southern hemisphere 260 ton, 32 wheels) to the 27 ton 4 wheel saddle tank. Oiled four times a year to prevent rust they look black and dirty whilst the working parts are in pristine condition.(below photo) Keith explained the workings of each model to us and I learnt that

They also have rolling stock to haul almost every commodity and the appropriate freight for each carriages. e.g. for the 1953 double-decker car-carrier they have purchased the first 6 models produced in 1953 to put in it and a tank for the military freight wagon.

The museum will eventually be under cover on 53 acres. This will open first and the entry fee will fund the start-up of steam train rides on the 35 kilometres of the Dorrigo branch line, one of the most scenic routes in the state.

This has all been done with a group of enthusiasts amassing the largest collection in the Southern Hemisphere. The members have outlaid over 7 million dollars for the purchase of the items and volunteer their time oiling the locomotives and other preparation to make them ready for display. You can become a member of the museum for $50 (go to website above). I am not a train enthusiast but I was overwhelmed by the passion and hope that they get the $330,000 in the near future that Keith believes would get them up and running.  Entry at the moment (without permission) is prohibited as this would affect their State Govt accreditation to run trains.

The township of Dorrigo would benefit from the museum it seems to have suffered the way many rural towns have, with the loss of timber, dairy and other rural activities and lack of employment for local youth. The tourism this museum would generate would be massive and could only benefit the town and supply jobs.

I began my working career as a reluctant potato peeler whilst waiting to commence my training as a student nurse. On completion I worked mainly in intensive care/coronary care; finishing my hospital career as clinical nurse educator in intensive care. A life changing period as a resort owner/manager on the island of Tanna in Vanuatu was followed by recovery time as a farmer at Bucca Wauka. Having discovered I was no farmer and vowing never again to own an animal bigger than myself I took on the Barrington General Store. Here we also ran a five star restaurant. Working the shop of a day 7am - 6pm followed by the restaurant until late was surprisingly more stressful than Tanna. On the sale we decided to retire and renovate our house with the help of a builder friend. Now believing we knew everything about building we set to constructing our own house. Just finished a coal mine decided to set up in our backyard. Definitely time to retire we moved to Queensland. I had been writing a manuscript for some time. In the desire to complete this I enrolled in a post grad certificate in creative Industries which I completed 2013. I followed this by doing a Master of Arts by research graduating in 2017. Now I live to write and write to live.
View all posts by Irene Waters 19 Writer Memoirist →
This entry was posted in 2013, Historical Perspective, musings, travel and tagged Carriage, Dorrigo, freight train, GARRAT loco, National park, Organizations, Recreation, rolling stock, Standard Gauge, Steam locomotive, train enthusiasts, train museum, train watchers, Trains and Railroads, Transportation. Bookmark the permalink.