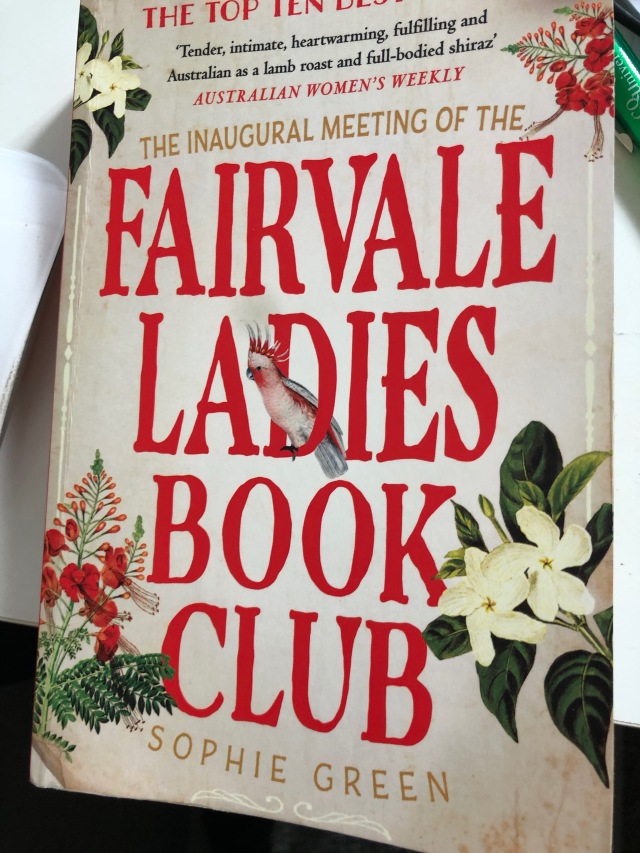 A long time friend gave me The Inaugural Meeting of the Fairvale Ladies Bookclub  by Sophie Green for my birthday with a little trepidation. She knows I read a lot and was worried it may not have been a book to my liking. How wrong she was – I found this book not only enjoyable but it made me jealous of this writer’s ability to put you in place, to describe perfectly emotions that I struggled to describe in my own book. But let me tell you about the story first.

It was set in the Australia’s Northern Territory on a vast, remote cattle property in 1978. It was hot and arid for most of the year, becoming humid in the wet which saw the property cut off from everything as the red bull dust turned to sludge. A family ran the property and the son had just returned from Britain with his bride. In an effort to make her life easier  Sybil Baxter started the Fairvale Ladies Book club which consisted of Sybil, the mother, her daughter-in-law, an American jillaroo from the next property (a couple of hours drive away), a mother that lived in the closest town (also a couple of hours away) and the flying doctor nurse who flew in from Alice Springs.

The themes in this book were many – interracial relationships, death, grief, miscarriage, isolation, domestic violence, resilience and friendship, love and trauma. It is set over a few years – the life of the book club – and prior to each year commencing the author gives a list of news events that happened in that year. This I loved as it put me back in that year with both memories of the events and of what life in general was like at that time.

Green’s ability to describe the setting put you there. You felt the isolation. You felt the pain of the mother when the daughter had a snake bite. The flying doctor had to come from Alice Spring.  Her drawing of the characters was also skilled making you like them or hate them and she had you emotionally involved. You were bound to them feeling their pain and happiness because these people were real.

The raw emotion that she described so well was where I became a tad jealous. She had managed to describe what I had wanted to in my book Nightmare in Paradise but had been unable to. Listen to the difference:

me: on hearing of the unexpected death of my father.

‘Nooooo!’ A long guttural scream emanated from someplace deep within as I dropped the phone, sinking to my knees on the floor crying.”

Sophie Green: on Sybil hearing of the death of her fiance Ray.

“…..There was that noise again. It was so odd. It sounded like it was in her head but also coming from outside the room,

She took a breath. She had to think about it because she wasn’t sure if she was breathing. Then that noise again. That noise was her, wasn’t it?  She could feel it pulling itself up from her gut. It wasn’t a cry. It wasn’t a howl. It was a protest.

This is not real. I refuse to believe it.

Such rational words and she wanted to say them. But all she had was this noise, …..”

Thank you Sophie Green for expressing so well what I felt that day.

Would I recommend this book: Indeed I would. In fact I am considering it as my choice for book club dependent on whether our library has any copies.

I began my working career as a reluctant potato peeler whilst waiting to commence my training as a student nurse. On completion I worked mainly in intensive care/coronary care; finishing my hospital career as clinical nurse educator in intensive care. A life changing period as a resort owner/manager on the island of Tanna in Vanuatu was followed by recovery time as a farmer at Bucca Wauka. Having discovered I was no farmer and vowing never again to own an animal bigger than myself I took on the Barrington General Store. Here we also ran a five star restaurant. Working the shop of a day 7am - 6pm followed by the restaurant until late was surprisingly more stressful than Tanna. On the sale we decided to retire and renovate our house with the help of a builder friend. Now believing we knew everything about building we set to constructing our own house. Just finished a coal mine decided to set up in our backyard. Definitely time to retire we moved to Queensland. I had been writing a manuscript for some time. In the desire to complete this I enrolled in a post grad certificate in creative Industries which I completed 2013. I followed this by doing a Master of Arts by research graduating in 2017. Now I live to write and write to live.
View all posts by Irene Waters 19 Writer Memoirist →
This entry was posted in Book reviews, creative writing, fiction, Writing and tagged book review, Books, Sophie Green, writing. Bookmark the permalink.