Sugar and Snails: A Book Review 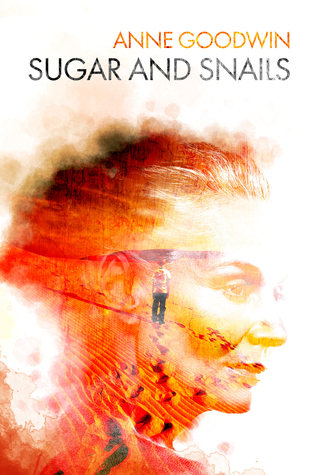 I had no idea what to expect when I started reading Sugar and Snails by Anne Goodwin but I was hooked from the start. This well written narrative is a coming of age novel  with a difference. Instead of the customary young adulthood, which is the normal end point in these types of stories, Dr Diana Dodsworth does not reach acceptance of herself until she is well into adulthood. The narrative segues seamlessly from past to present slowly revealing the secret Diana has held deep within. Slowly each layer is peeled back and with each peeling our knowledge and understanding of Diana deepen with each new piece of knowledge adding to Diana as a character and our own investment in her journey. I am being particularly airy fairy when it comes to the story line as for me part of the pleasure of this book  was unravelling the mystery of the event which happened to Diana in childhood. I have no intention of spoiling it for you but I can assure you that all of us will be able to relate to the emotions felt by the protagonist. I made a number of erroneous guesses at Diana’s secret, changing my thoughts as we learnt more and more. I didn’t get it until well into the narrative when it came as an unexpected shock.

Anne Goodwin’s professional career in psychology combined with her wonderful writing skills make this a book that I would highly recommend. I am not surprised that it was short listed for the 2016 Polaris Prize. It is available on Amazon  where it is described:

“The past lingers on, etched beneath our skin …

At fifteen, Diana Dodsworth took the opportunity to radically alter the trajectory of her life, and escape the constraints of her small-town existence. Thirty years on, she can’t help scratching at her teenage decision like a scabbed wound.

To safeguard her secret, she’s kept other people at a distance… until Simon Jenkins sweeps in on a cloud of promise and possibility. But his work is taking him to Cairo, and he expects Di to fly out for a visit. She daren’t return to the city that changed her life; nor can she tell Simon the reason why.

Sugar and Snails takes the reader on a poignant journey from Diana’s misfit childhood, through tortured adolescence to a triumphant mid-life coming-of-age that challenges preconceptions about bridging the gap between who we are and who we feel we ought to be.”

Anne Goodwin blogs at Annethology I am greatly looking forward to her next novel due out this year.

I began my working career as a reluctant potato peeler whilst waiting to commence my training as a student nurse. On completion I worked mainly in intensive care/coronary care; finishing my hospital career as clinical nurse educator in intensive care. A life changing period as a resort owner/manager on the island of Tanna in Vanuatu was followed by recovery time as a farmer at Bucca Wauka. Having discovered I was no farmer and vowing never again to own an animal bigger than myself I took on the Barrington General Store. Here we also ran a five star restaurant. Working the shop of a day 7am - 6pm followed by the restaurant until late was surprisingly more stressful than Tanna. On the sale we decided to retire and renovate our house with the help of a builder friend. Now believing we knew everything about building we set to constructing our own house. Just finished a coal mine decided to set up in our backyard. Definitely time to retire we moved to Queensland. I had been writing a manuscript for some time. In the desire to complete this I enrolled in a post grad certificate in creative Industries which I completed 2013. I followed this by doing a Master of Arts by research graduating in 2017. Now I live to write and write to live.
View all posts by Irene Waters 19 Writer Memoirist →
This entry was posted in Book reviews and tagged Anne Goodwin, book review, Sugar and Snails. Bookmark the permalink.

9 Responses to Sugar and Snails: A Book Review