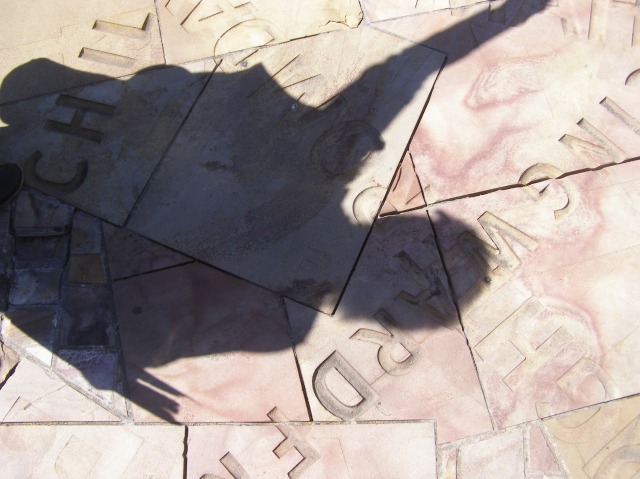 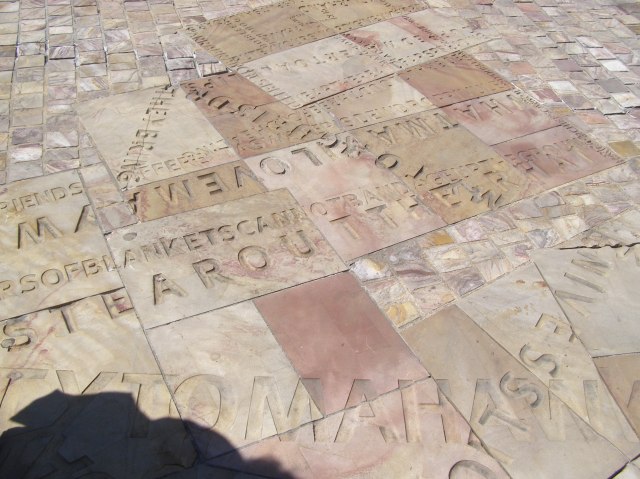 Federation Square in the heart of Melbourne’s CBD is a must visit when staying in the city. I’m am so glad that I did one of the free tours which leaves from the vistor’s information centre at 11am every day as I would not have understood half of what the architects and artist had in mind without the information that I gained from the guide and the pamphlets she gave me.

Nearamnew is a huge artwork which is underfoot. It consists of three parts. Firstly – a whorl pattern which uses cobblestones from the Kimberly sandstone laid in a fashion to cause you to walk and be aware of location and place, linking land and water and global, regional and local aspects of our federally organised society.

Located within this whorl are nine ground visions and nine vision texts. As you walk you read and the place becomes alive as the treader becomes part of the place as they add their own voices, associations, memories and imaginings. The texts of the Nearamnew are written on angles and in layers symbolising the reality of places.

The pamphlet says (and I agree) ” As you tread, you just might have the sensation of walking in the footsteps of the many who have gone before, retracing the many discourses that have tracked through, over and under this site.

Paul Carter, the artist, had a great vision as he told the story of the site’s rich and conflicting heritage.

I began my working career as a reluctant potato peeler whilst waiting to commence my training as a student nurse. On completion I worked mainly in intensive care/coronary care; finishing my hospital career as clinical nurse educator in intensive care. A life changing period as a resort owner/manager on the island of Tanna in Vanuatu was followed by recovery time as a farmer at Bucca Wauka. Having discovered I was no farmer and vowing never again to own an animal bigger than myself I took on the Barrington General Store. Here we also ran a five star restaurant. Working the shop of a day 7am - 6pm followed by the restaurant until late was surprisingly more stressful than Tanna. On the sale we decided to retire and renovate our house with the help of a builder friend. Now believing we knew everything about building we set to constructing our own house. Just finished a coal mine decided to set up in our backyard. Definitely time to retire we moved to Queensland. I had been writing a manuscript for some time. In the desire to complete this I enrolled in a post grad certificate in creative Industries which I completed 2013. I followed this by doing a Master of Arts by research graduating in 2017. Now I live to write and write to live.
View all posts by Irene Waters 19 Writer Memoirist →
This entry was posted in Australia, photography, Shadows, travel and tagged irene waters, Melbourne, Nearamnew, Photography, Shadow, Shadow shot Sunday2, travel. Bookmark the permalink.